Home / WORLD / Bruce Springsteen & other celebs are being whiny teenagers, threatening to run away if Trump wins. If only they would 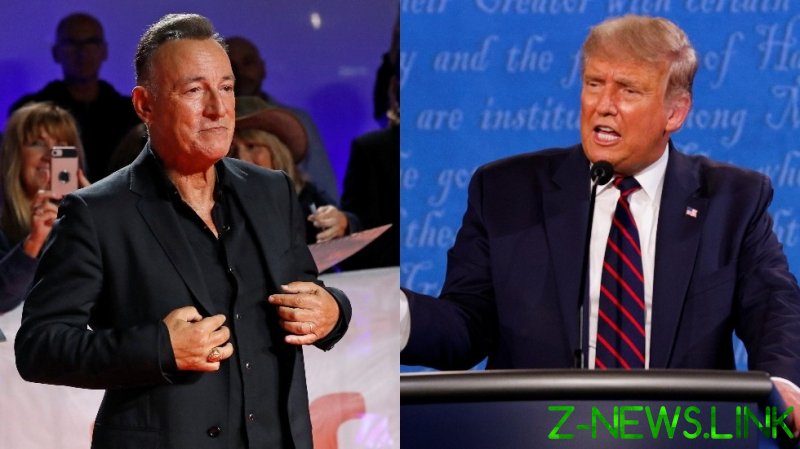 One of the more annoying aspects of the 2016 presidential election was the constant yapping from celebrities about leaving the country if the former host of ‘Celebrity Apprentice’ was elected president over their precious and not-at-all flawed pick, Hillary Clinton.

Lena Dunham, Amy Schumer, Snoop Dogg, Miley Cyrus… one after another doled out their empty promises, thinking they could hold Americans’ votes hostage simply by threatening to become expats.

Well, it’s that time of year again, folks, and we’ve already got celebrities doubling down on that winning strategy once more. Two of the biggest names to threaten us with the possibility of vacating the US are Bruce Springsteen and Motley Crue drummer Tommy Lee.

“If Trump is re-elected – which he will not be; I’m predicting right now he’s gonna lose – if by some happenstance he should be, I’ll see you on the next plane [to Australia],” Springsteen recently told the Daily Telegraph.

Springsteen might want to start booking that ticket, because he tried predicting the election in 2016 as well and, like most liberals unwilling to accept that anyone could vote for someone besides Clinton, he was wrong.

Tommy Lee also recently whined about a potential Trump reelection, saying he may be moving to Greece – where he was born when his father was in the military – if it happens.

Asked by the Big Issue what he would do if Trump beat Joe Biden, the drummer replied, “Dude, I swear to God if that happens then I’m coming over to visit the UK – I’m out of here. I’ll go back to my motherland, go back to Greece and get a house on one of the islands.”

Ironically, in another part of the rambling interview, Lee says we need to “stop voting for celebrities and get someone real to run the US.” So these “celebrities” aren’t good enough to run for office, but they should be the ones telling us who to vote for and threaten leaving the country if we happen to disagree?

“They really think they’re that important,” comedian and television producer Michael Loftus told Fox News in response to the news of Springsteen and Lee. “They really think we’re walking around going, ‘Wait, what? Springsteen’s going to leave? And Tommy Lee? Oh, I’m changing my vote!’”

This is exactly what they think, but what makes it more pathetic is that this strategy was put on steroids in 2016 and did nothing, so the idea that celebrities are still overvaluing their importance when it comes to people filling out ballots only speaks to their ignorance and disconnect from reality.

Speaking of reality, these celebrities need to be knocked across the head with a good old-fashioned reality check. This idea of fleeing the country and simply buying a new house somewhere else and continuing your career comes easy to them because they are millionaire public figures, long insulated from the doldrums of working life that typically inform the way most people vote. The fact that they even have the sustained success to comfortably be able to pick up and shoot over to Australia or buy a home in Greece speaks to how well they are doing under the very president they despise so much.

This is not to say that Trump can take any credit for these celebrities’ success, but it is rather an example of the bloated importance put on the office of the presidency, especially by celebrities likely bothered on a daily basis by little more than MSNBC or CNN headlines they don’t like here and there. Springsteen, Lee, and others will be just fine no matter who is president. While Americans struggle during a pandemic to keep their jobs, pay their rent, etc. these celebs threatening us with the oh-so-frightening future of an America without them are comfortably nestled into Hollywood bubbles where you don’t vote for Trump because that would just not be the cool thing to say you did at the next cocktail party.

These consistent threats are not based in real emotion or politics. They are the result of the narcissistic feelings of grown babies with egos that are fed day in and day out by an eager media and the instant gratification of social media. Celebs are threatening to leave in the hopes it will influence everyone else’s decision to be like theirs, just like a teenager might scream about running away in a fit of hormonal rage to get their parents to change their mind about something. But, like that hormonal screaming teenager, these celebrities’ threats are empty, because they’re too comfortable where they are to ever actually walk out the door.