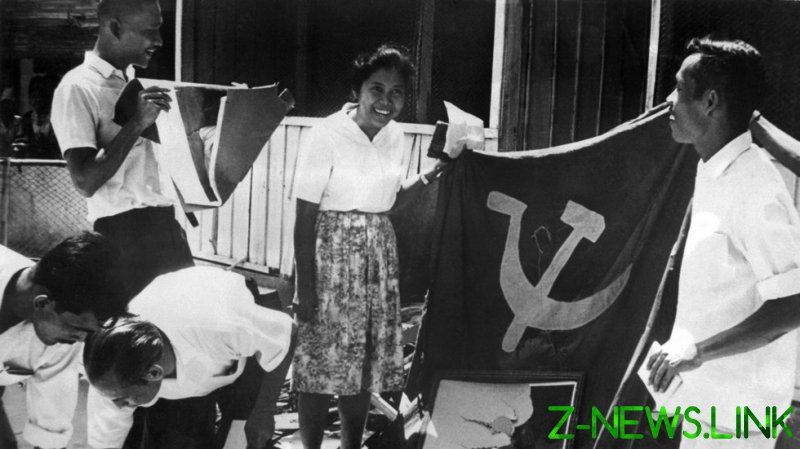 The Indonesian Army’s brutal clampdown on the PKI in 1965 and 1966 is considered to be one of the worst mass murders of the 20th century. Between 500,000 and three million supporters of the Communist Party were slaughtered, according to various estimations.

Declassified Foreign Office documents, which were recently released by Britain’s National Archives and seen by The Guardian newspaper, indicate that the UK isn’t without fault in those shocking events.

The British Foreign Office had always denied the country’s involvement in the brutal clampdown on those blamed of communist links in Indonesia.

But it turns out that London focused its propaganda machine on the founding Indonesian President Sukarno and his communist backers over the leader’s stern opposition to the Federation of Malaya, which the UK thought should unite its former colonies in the region.

Tensions between the PKI and the Indonesian military had been mounting since the early 1960s, with the president struggling to balance the rivaling forces. The army-sponsored massacre of communists began after a failed coup attempt by the supporters of Sukarno within the army ranks on October 1, 1965.

Several months before that, a team of specialists from the Foreign Office’s Information Research Department (IRD) had already been deployed in Singapore to produce black propaganda to undermine Sukarno’s rule, according to The Guardian. The failed coup only made it easier for the propagandists to influence their intended audience, which included anti-communist politicians and Indonesian army generals.

The propaganda was shared through an Indonesian-language newsletter, which was said to have been the work of Indonesian immigrants, but was actually issued by British specialists in Singapore. Within a year, some 28,000 copies of the newsletter had been published. The UK also funded a radio station, which Malaysians had been broadcasting into Indonesia.

Shortly after the massacre of the communists by the military began, the British-produced newsletter called for “the PKI and all communist organisations” to “be eliminated.” It claimed that Indonesia will remain in peril “as long as the communist leaders are at large and their rank and file are allowed to go unpunished.”

“Procrastination and half-hearted measures can only lead to… our ultimate and complete destruction,” the authors of the pamphlet warned their readers.

The killings allegedly intensified across the Indonesian archipelago in the weeks following the publication of the newsletter, with The Guardian insisting that “there can be little doubt that British diplomats became aware of what was happening.” The UK spies in the region had all the means to intercept Indonesian government communications and monitor the movement of its military, according to the paper.

One of the newsletters, released during the clampdown on the communists, had praised “the fighting services and the police” for “doing an excellent job.” The British propagandists compared the PKI to Adolf Hitler and Genghis Khan in the pamphlet, and insisted that “the work started by the army must be carried on and intensified.”

Moreover, a letter from Norman Reddaway, one of the leading propagandists working in Singapore, to the British ambassador in Jakarta revealed the UK’s strategy “to conceal the fact that the butcheries have taken place with the encouragement of the generals.” He wrote that such an approach should’ve been taken in the hope that the generals would “do us better than the old gang.”

The Foreign Office experts and Indonesian generals were “singing in harmony,” Reddaway insisted in another declassified document. He also celebrated the British propaganda for being able to abolish Sukarno’s opposition to the Federation of Malaya project at “minimal cost” and within just half-a-year.

What Reddaway described as “the old gang” was completely crushed by the bloody events of the mid-1960s. President Sukarno was arrested in 1967 and died three years later under house arrest.

He was overthrown by General Suharto, who had been leading the Indonesian Army. Suharto then ruled Indonesia until 1998, enjoying political and economic support from the West. Transparency International (TI) labeled him the most corrupt politician in modern history in 2004, claiming that he embezzled between $15 billion and $35 billion during his time in office.

Documents that were declassified in the US in 2017 revealed that Washington also not only had “detailed knowledge” of the massacre of communists in Indonesia, but provided “active support” for those actions.

A Yale University study described the slaughter ordered by Suharto as an “absolutely essential cleaning out,” detailing the killing of from “50 to 100 PKI members” every night by civilian anti-communist groups with the “blessing” of the military.