Home / WORLD / Britannia fools the waves: UK sent clear signal to Moscow with warship in Crimean waters… just probably not the one it intended

Britannia fools the waves: UK sent clear signal to Moscow with warship in Crimean waters… just probably not the one it intended 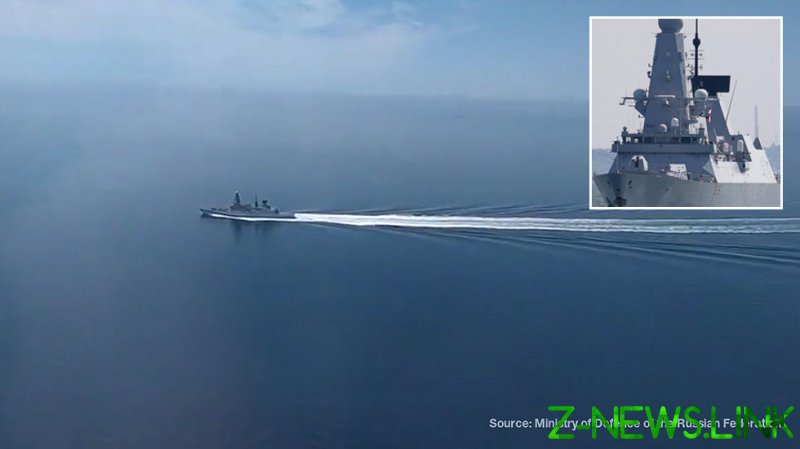 This was the dynamic on show on Wednesday in the Black Sea. A British warship, the HMS Defender, transited through what Russia says are its territorial waters, near Crimea, sailing within 12 nautical miles of the peninsula’s coast.

This provoked a tough response from the Russian military. According to the BBC, “Moscow’s defence ministry said a patrol ship fired warning shots and a jet dropped bombs in the path of HMS Defender.” The British Ministry of Defence has denied this, however, insisting that, “no shots were directed at HMS Defender and we do not recognise the claim that bombs were dropped in her path.”

Jonathan Beale, a BBC journalist who was on HMS Defender, provided an account that lies somewhere between that of the British and Russian authorities. Beale failed to confirm Moscow’s claim that bombs had been dropped, but he did record Russian aircraft buzzing the warship, saying that at times there were “more than 20 aircraft” above the British ship, as well as “warnings from Russian coastguard vessels” and “shots fired,” albeit “out of range”.

The status of Crimea’s waters is disputed by a large number of states. Moscow maintains that they constitute Russian sovereign territory. The UK, on the other hand, continues to recognize Crimea as Ukrainian, and therefore rejects Moscow’s claims to control over the area.

Regardless of who is right, the United Nations Convention on the Law of the Sea permits ships to transit through the territorial waters of other states, in what is known as the “right of innocent passage.” In terms of this right, it doesn’t actually matter whether the waters in question are Ukrainian or Russian. Ships of other countries still have a right of innocent passage.

The general consensus of Western legal scholars is that this right applies to warships as much as to civilian vessels – as long, of course, as the passage is truly “innocent.” The Russian understanding of the law, however, is a little less clear. Given that the HMS Defender went straight through the Crimean waters and then out again, without threatening Russia in any way in the process, it would be hard to say that its passage didn’t meet the criteria of “innocent.”

International law is, of course, a contentious matter. In the absence of a judicial decision, one can never definitively say who is right and who is not. But on the surface, the British have reasonable grounds for thinking that the law is on their side.

Moscow’s actions are somewhat more problematic. Given that the British ship had a right of passage, if Russian aircraft did indeed drop bombs in an effort to prevent that passage, they would appear to have acted in contravention of the law of the sea. If, however, all they did was buzz HMS Defender, then there was no direct use of force, and so no law was broken. Oddly enough, therefore, the British account of events is somewhat more favourable to Russia, legally speaking, than the Russian version.

But the law is one thing and political good sense something else. While the Brits may have had the former on their side, they were decidedly lacking when it comes to the latter.

HMS Defender didn’t sail through Crimean waters just for the sake of it. The act was clearly designed to send a signal to Russia.

If anybody in the UK’s Ministry of Defence had had half a brain, however, they should have realized that the chances that Moscow would interpret that signal in the desired manner were somewhere close to zero.

The signal that London intended to send is somewhat unclear. On the surface, it appears to have been a sign that it does not recognize Russian sovereignty over Crimea. Alternatively, Britain could have thought it was striking a blow for the importance of international law, particularly the law of the sea. Or, finally, it might have been trying to prove to the other side that it is armed and ready to confront it should it become embroiled in a conflict. In other words, the message may have been one of military deterrence.

From a British point of view, those messages might be obvious. The problem, however, is that from a Russian point of view they’re not. Russia already knows that the UK considers Crimea to be part of Ukraine. Britain didn’t have to send a warship to Crimea to make the point. Inevitably, therefore, Moscow will take the view that something else lies behind the action.

Messages about international law face a similar difficulty. Rather than getting a signal that the UK demands respect for international law, Russia will most likely interpret these events as indicating that Britain feels free to do whatever it wants, wherever it wants, irrespective of established concepts like sovereignty.

And finally, Moscow is likely to view the matter of deterrence rather differently from how the British intended. Russian authorities will almost certainly believe that they were the ones who did the deterring. A lone British warship turned up, and, almost immediately, more than 20 Russian warplanes were overhead. “Try any funny business in the Black Sea, and you’ll be crushed by overwhelmingly superior force” is the message Moscow is sending back to London. The Russians may well feel that they got the better of the encounter.

Of course, just as the British signal to Moscow will likely be misinterpreted, so too will the Russian counter-signal to London. And so, tensions between the pair will continue to spiral further upwards.

The lesson is clear: sending signals by military means is a dangerous game, and best avoided. Sadly, it seems that in the UK, moral posturing takes precedence over sound strategic planning. Crimea is a long way from Britain. There’s absolutely no need for British ships to be there, and in the long term, this action is unlikely to work to London’s advantage.

The British may have imagined that they were sending a strong message to Moscow. But the message Moscow received is most probably that it should be doing more to enhance its military capabilities and prepare for more such engagements. One doubts that was what London was intending.