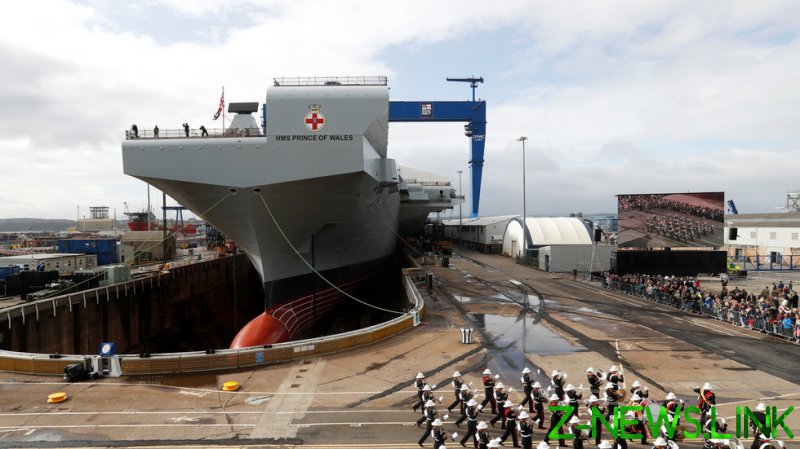 Costing the British taxpayer a whopping £3.2 billion, the HMS Prince of Wales is the jewel in the Royal Navy’s crown. Along with its sister ship, HMS Queen Elizabeth, the Prince of Wales is capable of launching NATO’s next-generation F-35 fighter jet and operating at a range of 10,000 nautical miles.

It’s also seemingly incapable of keeping water outside. According to reports in British media on Monday, the ship will remain docked at its home port of Portsmouth until May 2021, after a flood in October destroyed some of its electrical systems. A burst fire main spilled thousands of gallons of sea water into the ship’s engine room, submerging the systems for more than a day.

The Prince of Wales will now miss out on a planned trip to the US at the end of the year, where it was due to take part in F-35 training exercises.

“It’s embarrassing,” a military source told the Sun. “The America trip took years of planning and we’ve had to say we can’t come. It will take months to repair the damage. Costs will run to millions.”

The October flood isn’t the first time the Navy’s 65,000-ton behemoth has sprung a leak. Back in May, a Facebook video apparently showed water cascading down from a ceiling and into the ship’s living quarters.

At the time, a Navy spokesman told the Daily Mail that the leak was a “minor issue,” and that crewmembers had to “remove a small volume of water from the ship.” HMS Queen Elizabeth also suffered a leak last year, in July, when several decks were flooded.

Designed in the late 1990s, HMS Prince of Wales had a turbulent journey into service. Budget cuts in 2010 threatened to derail the project, but construction contracts had been signed, and building began a year later, with the government originally planning on selling it upon completion. Only in 2014 did then-Prime Minister David Cameron opt to bring it into service.

Despite the fact that the Queen Elizabeth and Prince of Wales cost the taxpayer a combined £6.2 billion, a report by the Public Accounts Committee, published last month, accused the government of failing to adequately fund the carriers.

According to the report, problems with the ships’ radars will leave the vessels with “less protection than planned,” while “[the] department also lacks the support ships it needs to supply the carriers and has not yet developed a long-term solution to move people and goods to and from a carrier group.”

Furthermore, the report accused the government of a “debilitating lack of clarity” over the cost of purchasing the F-35s that will operate from the carriers.

The Navy expects HMS Prince of Wales to be ready for frontline duties in 2023. For residents of Portsmouth, that date likely can’t come quickly enough. According to a report by local paper The News, the sound of the ship’s diesel generators has been keeping locals awake at night, with one telling the news site that people were sticking “our heads under our pillows at night” to get some sleep.