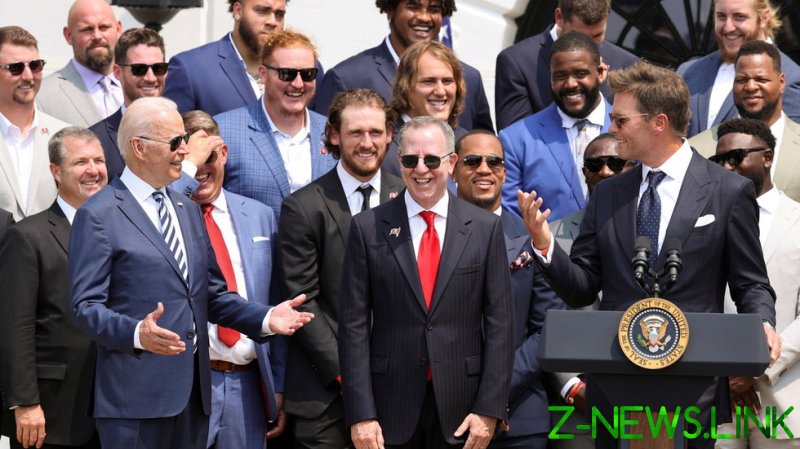 NFL icon Brady has explained in the past that he is a friend of Trump’s but refused to openly endorse the tycoon on the campaign trail, claiming it made him “uncomfortable”.

Since 78-year-old Biden became the oldest president in US history by beating Trump at the ballot box last November, Brady made similar history with the Bucs as, at 43, the oldest QB to lift the Super Bowl – which was a record sixth title for the Californian in total – in February.

And as Brady’s team visited the White House with the Lombardi trophy won against the defending Kansas City Chiefs, this wasn’t lost on Biden. 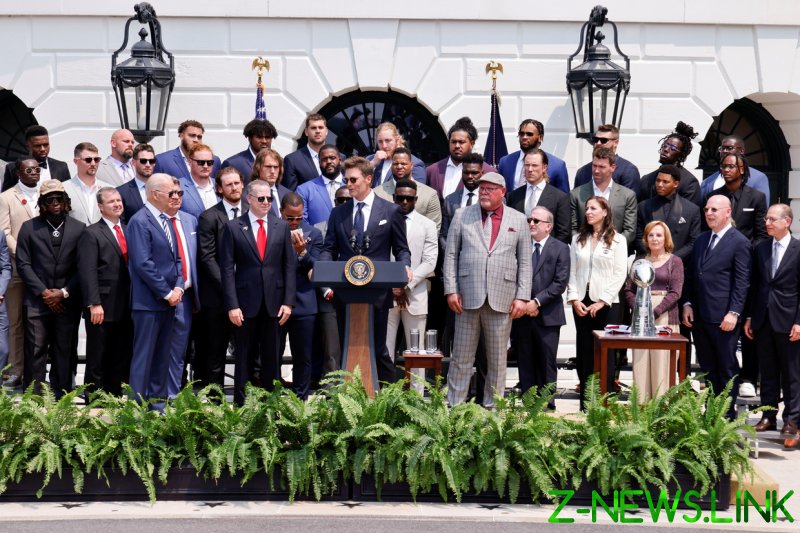 Brady spoke at the White House as Biden watched on. © Reuters

“A lot has been made about the fact that we have the [third] oldest coach [Bruce Arians] to ever win a Super Bowl and the oldest quarterback ever to win a Super Bowl,” the president quipped.

“You won’t hear any jokes about that from me. As far as I’m concerned, there’s nothing wrong with being the oldest guy to make it to the mountaintop.”

“Tom, [you’re] looking like you got about 20 more years left. You’re just about the best to ever play,” added Biden.

Brady joined in the love-in with Biden by appearing to crack a few jokes at Trump’s expense, making veiled references to the claims of election fraud and Trump’s pet nickname for his former political rival.

“Not a lot of people think that we could have won,” Brady joked on the White House lawn about the Buc’s Super Bowl triumph.

“In fact, I think about 40% of the people still don’t think we won. You understand that, Mr. President?”

“I understand that,” a smiling Biden replied.

Brady then landed another apparent gag at Trump’s expense with a nod to the “Sleepy Joe” nickname Biden was given by the former president.

“We had a game in Chicago where I forgot what down it was,” Brady began.

“I lost track of one down in 21 years of playing and they started calling me ‘Sleepy Tom’. Why would they do that to me?” he asked. 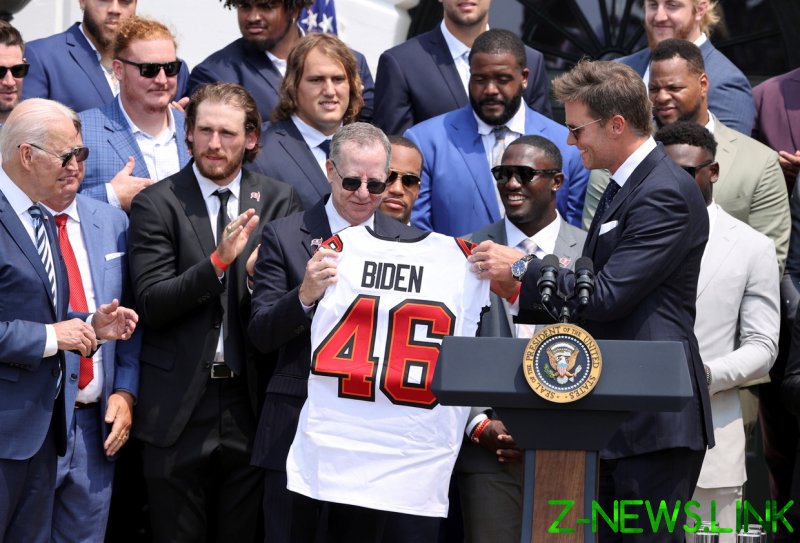 Online, social media users made comments such as there not being a lot of things that “could make Trump much angrier than Brady and Biden yukking it up together at his expense”.

“Really no deeper cut for Trump than Brady saying it,” another said of the former’s “election denialism”.

The Donald’s supporters were less impressed, however, with Breitbart’s Joel Pollack raging: “Whatever you think of Trump, watching Tom Brady stab him in the back is disgusting. The mark of a true tragic hero is that even his friends betray him.

“The man has sacrificed more for this country than Tom Brady — or Joe Biden, for that matter — ever will.”

Elsewhere, others claimed Brady had never been all that into Trump anyways.

“Tom Brady’s appearance at the White House today is a reminder that, contrary to what a lot of people think, Brady never publicly supported Trump in either 2016 or 2020,” began one breakdown.

“Brady said one time in 2015 that he thought it would be cool to have a guy he’d golfed with in the White House.”

“The Trump campaign sent Brady a MAGA hat and Brady had it in his locker early in the 2015 season, leading people to call him a Trump supporter,” it was further expanded.

“Brady is laser-focused on football, not politics, and I’d bet he knew nothing about Trump’s stances on the issues at that point.”

Perhaps rubbing salt further into the Trump wounds were the scenes as a smiling Brady handed Biden a Bucs jersey with ‘Biden 46’ on the back.