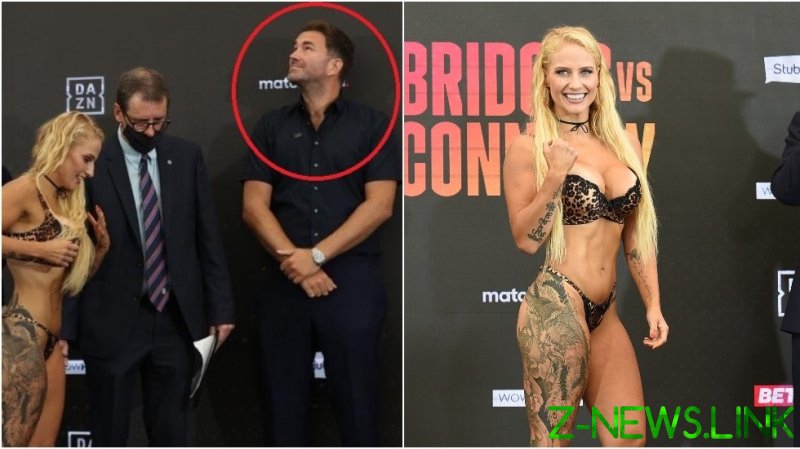 Trying to get her 5-1 career back on track after losing a spirited WBA bantamweight title bout against Shannon Courtenay via unanimous decision last time out, Bridges will take on Bec Connolly at the Matchroom Headquarters in the UK this weekend.

Completing the customary weigh-in the day before fight night, the Aussie came down to the scales dressed as comic book character Harley Quinn before stripping down to her leopard-themed underwear.

A happily married father-of-two, the promotion’s head Hearn could be seen doing his best not to set his eyes on the Aussie stunner, with Bridges later seeing the funny side of it too.

“Best meme wins,” Bridges challenged her 69k followers on Twitter, tagging Hearn in a photo of him looking up above and anywhere but the 34-year-old’s direction.

“Do I need to put mirrors on the ceiling?” was another’s choice.

“I’m just gonna look up here and think about what I’m gonna have for tea. Hmm thighs, chicken thighs. Where am I again?,” said someone else.

“However he missed a great outfit today inspecting the ceiling I must say.”

After wowing punters once again on the scales, Bridges has promised a knockout of her foe tomorrow.

“Bec always comes out strong and fast, and I’m a bit similar,” Bridges explained this week.

“I feel like it’s going to be a heated fight because we both like to get into a scrap, but I’m not going to get drawn into a firefight if I can just box her.

“I’m definitely going for the stoppage, and she’s not somebody who really gets stopped, particularly at 118lbs which would be the lighter side.”