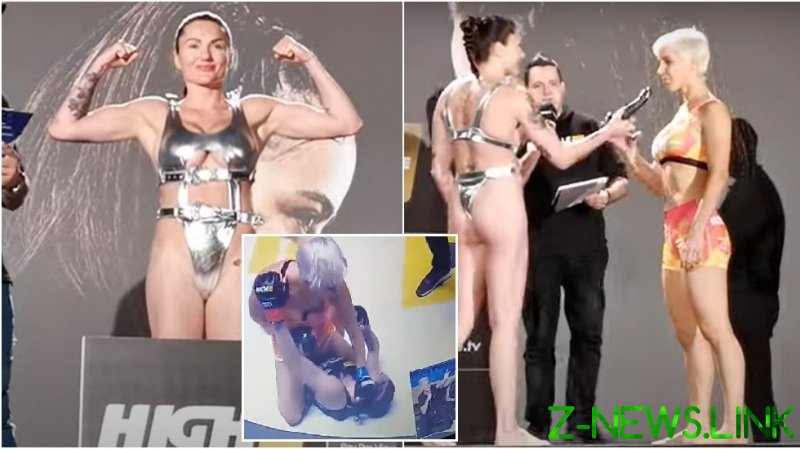 Tensions had run high between Bogusz – a social media influencer-turned-pop star – and Brodnicka as they prepared for their High League showdown at Ergo Arena in Gdansk-Sopot on Saturday.

Bogusz responded by grabbing the item and hurling it back at her opponent, sparking blows and a tense verbal exchange between the pair.

However, it was ‘Lil Masti’ who stuck it to her rival when the two finally met in the cage, utilizing her superior MMA experience having won her two previous outings in the cage prior to facing Brodnicka.

After dominating on the ground throughout the contest, and with Brodnicka being a deducted a point in the opening round due to an eye-poke, Bogusz finally got the job done in the third round with an array of blows from crucifix position.

Afterwards, Brodnicka demanded an immediate rematch, claiming she had been nursing a knee injury heading into the bout.

“I want a rematch very much, I’d like to have more time to polish my ground game and I’d like to enter the cage without any injury,” said the 37-year-old.

The beaten Brodnicka is no stranger to weigh-in controversy, having sparked a brawl with rival Edith Solidad Matthysse when she planted a kiss on the Argentine before their boxing bout in October of 2019.

On that occasion Brodnicka had backed up her smack talk, defeating Matthysse by split decision as part of a 19-fight winning streak in the ring which only came to an end at the hands of undefeated American Mikaela Mayer in Las Vegas last October.

After seeing off Brodnicka to extend her unbeaten MMA record to 3-0, the boastful Bogusz crowed on social media: “The win is ours!

“I defeated a professional world champion boxer. It still hasn’t sunk in…

“Thank you for your support. I thank those who believed in me… And those who did not believe may change their mind about me.”

According to Polish media, for her next act Bogusz is next targeting a fight with a man.