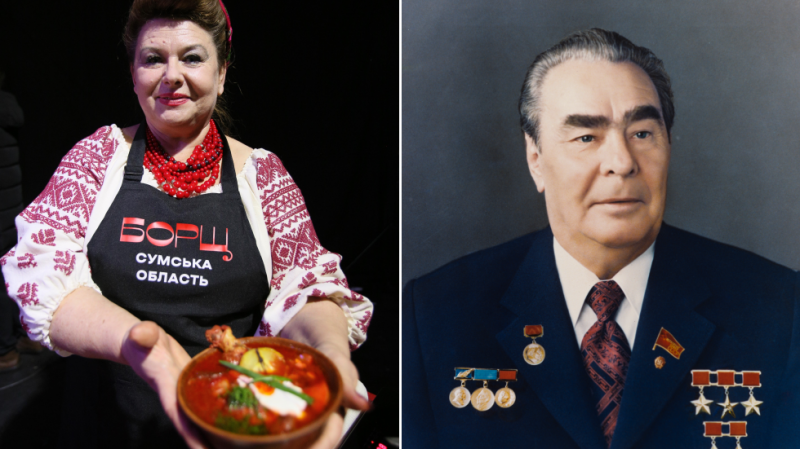 You might laugh at nonsense debates like ‘Kyiv or Kiev?’ or whether Mikhail Bulgakov was Russian or Ukrainian, but, like most culture wars, what seems to be just minor and silly fixations masks larger existential questions about the future of the nation.

Thus, we have a strange situation where Ukrainian information warriors are waging a campaign to have the borsch beetroot soup labelled under their flag, but have not campaigned for Leonid Brezhnev, arguably the most powerful Ukrainian who ever lived, given he ran the Soviet Union at its peak. Meanwhile, the memory of Nikolay Gogol (or Hohol, as they are trying to rebrand him) is coveted by many in Kiev, but there is no call to identify with or to honour Ukrainians such as Bolshevik firebrand Leon Trotsky or ex-KGB chief Vladimir Semichastny.

Another curious omission is Nikita Khrushchev, who grew up in Eastern Ukraine and began his political career in the country. This is despite the fact that this famous son of the Donbass gifted Crimea to Kiev.

There is also an external element. The US, for instance, has recognised that the political conflict in Ukraine is largely a struggle between conflicting cultural identities and national identities. Instead of focusing on the commonality between rival cultural identities to achieve stability, the US has become an active contributor in a proxy culture war to contain and confront Russia.

After more than a thousand years of shared Russian-Ukrainian history, it is no small challenge to organise relations between two distinctive and sovereign states. Alexander Solzhenitsyn wrote: “It is useless to tell Ukrainians that we all descended, by birth and spiritually, from Kiev, and it is just as useless to expect Russians to recognise the fact that people beyond the Dnieper River are different.”

The close historical relationship between Russians and Ukrainians represents a double-edged sword for Ukraine as it lays the foundation for a fraternal bond, yet the historical closeness can also undermine Ukrainian sovereignty. If there are no differences between Russians and Ukrainians, then what makes Ukraine an independent state? Case in point, when Crimea reunified with Russia, Ukraine lost about 75 percent of its naval personnel that voluntarily defected to Russia or quit. It should therefore not be a surprise that the cultural identities of Ukrainians range from visceral hostility towards Russia to those who question the need for two separate states.

The battle for the future of Ukraine is largely a struggle to control the historical narrative, culture and national identity. Historical narratives and identities are largely based on the story of the original people and the shared suffering and victories. The Eastern Slavic identity views Ukraine as a bi-ethnic, bi-cultural and bi-lingual state, and the greatest domestic threat is ethno-cultural nationalists. The ethno-cultural Ukrainian identity presents Ukraine as a single and distinct ethnicity, culture and language, and the greatest domestic threat derives from the Eastern Slavic Ukrainians who preserve the russification of Ukraine as an imperial legacy. How can a common national narrative and identity be reached?

Is Kievan Rus the common civilizational cradle of Russia and Ukraine, or does Ukraine monopolise on the history?

Was the Pereyaslav Agreement in 1654 a reunification of Russians and Ukraine that led to more than three centuries of common statehood, or a Russian annexation of Ukraine?

Was the Holodomor famine the result of failed policies by a Georgian dictator or a deliberate “genocide” by Russians?

Were Stepan Bandera and the OUN fascists and Nazi collaborators or “freedom fighters”?

Should the common Soviet history be celebrated or condemned? Is Russia a brotherly nation or an imperialist neighbour?

Nation-building requires finding a middle ground and avoiding winner-takes-all positions where 51 percent of the country will pursue nation-building policies that are perceived by the other 49 percent as dismantling the nation. The common position and source of unity has been the recognition of sovereignty. Ukraine must assert itself as a distinctive political entity that is different from Russia, yet not defined as anti-Russian.

A divided Ukraine in a divided Europe

Nation-building is innately linked to region-building. How can Ukraine escape the double-edged sword of being historically close to Russia without imperiling its sovereignty? The obvious solution is to diversify Ukraine’s relations. By only cooperating and integrating with Russia, Ukraine would risk resentment and instability in its western regions. Similarly, only cooperating and integrating with European and American powers will be intolerable to Ukraine’s eastern regions. Furthermore, Russia is compelled to act if Ukraine positions itself as an American/NATO frontline against Russia.

Ukraine initially followed a neutral path by maintaining close links to Russia, yet avoiding excessive reliance on it by also connecting with the other centres of power. In the days of President Leonid Kuchma, this ambition was defined as seeking a “return to Europe with Russia.” On the eighth anniversary of Ukraine’s independence, Kuchma argued that Ukraine’s “European choice” could not entail that Ukraine “turn our back on our neighbours, on our own past, which connects us to them.” Simply put, Ukrainian nation-building was reliant on avoiding zero-sum choices between East and West.

Unfortunately for Ukraine, European integration has been advanced in a zero-sum format. The West rejected the concept of a Greater Europe in cooperation with Russia, and instead pursued a Western-dominated Europe to be organised under an expansionist NATO and EU. For Ukraine, this translated into a zero-sum civilizational choice between the West and Russia. In late November 2013, the EU rejected Kiev’s proposal for a trilateral EU-Ukraine-Russia agreement that aimed to preserve Ukraine’s internal cohesion and prevent it from becoming a geopolitical battleground. A divided Ukraine had to choose sides in a divided Europe and the predictable consequences ensued.

The political-media establishment in the West advanced the narrative of a Ukraine standing united in its Euro-Atlantic ambitions, which is crushed by an evil and imperialist Russia. The immediate problem with this Manichean tale is that it deprives many Ukrainians of agency by demoting them to instruments of an alleged Russian “hybrid war.” A key initiative has therefore been to use the enduring conflict to strengthen the ethno-cultural identity vis-à-vis the eastern Slavic identity.

The Atlantic Council, a mouthpiece for NATO, aptly notes that the culture war is an arena for political competition. Welcoming the identity politics of Ukraine, the Atlantic Council argues that Ukraine’s “cultural revival” since 2014 has counteracted Russian “hybrid warfare.” The Atlantic Council recognises the value of contesting the historical narrative of Russia being a successor of Kievan Rus, and even encouraging foreign media to change the English spelling of Kiev to Kyiv in solidarity with the ethno-cultural nationalists. The US Senate passed a resolution that defined the Holodomor famine as a “genocide” against Ukrainians, while the fascist links of various influential Ukrainian groups are downplayed. Yet, the Atlantic Council believes that the greatest nation-building achievement has been the decoupling of the Ukrainian and Russian Orthodox Church.

In the most Orwellian manner, the US supports the purging of opposition parties and media under the auspices of fighting Russian “hybrid warfare.” Never mind that these are long-standing Ukrainian opposition parties and Ukrainian-based/Ukrainian-owned media channels. By denying agency to Russian-speaking Ukrainians, the banning of the Russian language in books, movies and other works is also consistent with the US approach to Ukrainian nation-building. The bold ambition to sever a millennium of Russian-Ukrainian cultural connection to create a new geopolitical reality has made the US an eager participant in a proxy culture war.