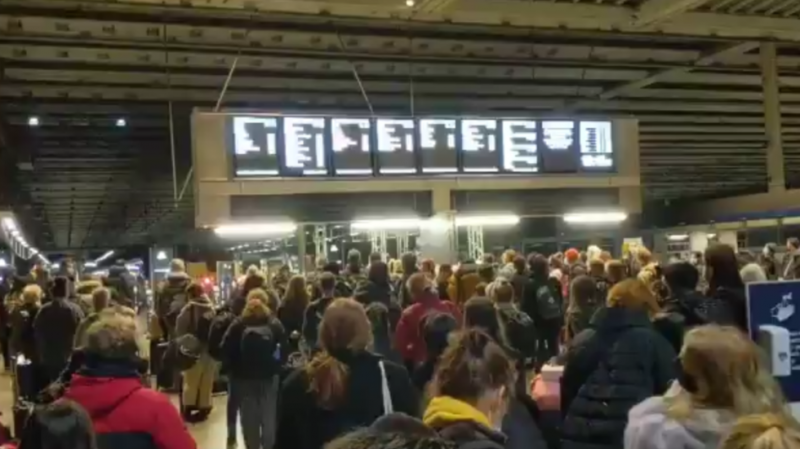 “Congratulations prime minister and your experts,” Brexit Party leader Nigel Farage quipped on Twitter Saturday. “You have caused the first evacuation of London since 1939.”

Videos posted on social media showed large crowds at train stations, queuing to escape an area designated as Tier 4 under the UK’s Covid-19 rules. Johnson said earlier Saturday that those living in the Tier 4 zone — which includes London, the Southeast and Peterborough – should not mix with anyone outside their own household, effectively canceling Christmas. Non-essential businesses will be closed, effective on Sunday.

The crackdown came in response to a new strain of coronavirus that allegedly spreads faster, although there’s currently no indication that it’s more lethal or more vaccine-resistant than the earlier version of the virus.

But if the goal was to keep the new strain from being spread to other parts of the country, the lockdown may have been ill-conceived. The announcement of a midnight London lockdown gave residents only about eight hours to find a way out of the city. Videos on Twitter show massive crowds of travellers trying to flee London, including a long line of people waiting to board the train for Leeds from St. Pancras Station.

“Every person on this train, including myself, has made what is probably a very silly and irresponsible decision to travel, albeit within the law,” journalist Harriet Clugston tweeted. “But that’s what people were always going to do to be together at Christmas.” She added that the train to Leeds was being delayed because of overcrowding.

The scene at St. Pancras was so crowded and chaotic that people were told that social distancing wouldn’t be possible, the Evening Standard reported. Londoners apparently ignored a statement by Chief Medical Officer for England Chris Whitty advising people trying to flee Tier 4 areas to unpack their bags and stay home.

“If they didn’t want this new variant to get out of London, it’s just found a possible new route,” ITF News journalist Chris Ship said. “It’s called the train line to the East Midlands from St. Pancras Station tonight.”

Another commenter tweeted out a transport map, showing the heavy flow of traffic at a time when people have been advised to stay at home. “Come on, London,” the Twitter user said. “Prove that lockdowns work by taking your new mutant plague to the four corners of the country before midnight.”

But former UK Independence Party leader Henry Bolton said that given that the new coronavirus variant spreads 70 percent faster, Johnson made a courageous and correct decision. “It’s extremely unwise, negligent even, not to review your decisions in light of new information or changed circumstances.”

It’s not clear what sort of Covid-19 troubles could be waiting for the evacuees at their destinations. Government rules that allowed as many as three households to gather from December 23 to December 27 were canceled in Tier 4 areas and curtailed elsewhere in England. Outside Tier 4, three-household gatherings are limited to Christmas Day only, rather than the five-day period that was planned. Non-essential travel in and out of Tier 4 areas was banned as of midnight.

The shutdown will remain effective until at least December 30, when government officials reassess the situation.