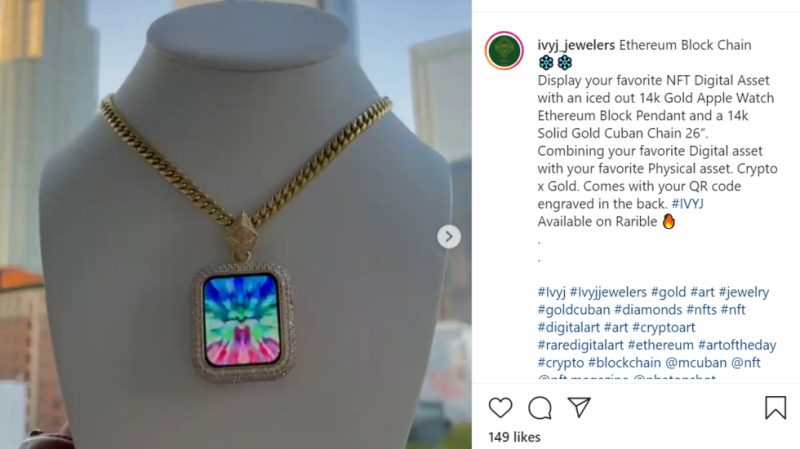 The ‘Ethereum Block Chain’, a play-on-words that references the popular decentralized blockchain, allows the wearer to showcase an NFT digital asset using a 14k gold Apple Watch. The device is attached to a similarly glitzy 14k gold chain. The necklace combines “your favorite digital asset with your favorite physical asset,” its creator, Ivy J Jewelers, wrote in an Instagram post. The locket also includes a custom engraving of the QR code that directs to the wearer’s crypto wallet.

An NFT is a digital signature stored on a blockchain ledger that allows anyone to verify ownership and authenticity of items. In theory, an NFT can be anything that can be stored digitally, including photographs, paintings, as well as videos and animations.

In a clip posted to social media, the necklace’s gold-adorned Apple Watch displays several animations, as well as an NBA ‘Top Shot’ NFT.

The locket was put up for auction on Wednesday with the starting price of 6 ETH (approximately $11,515 at the time of writing). However, Ivy J Jewelers canceled the auction before anyone was able to place a bid.

The futuristic bling caught the attention of crypto enthusiasts on Twitter, with many drooling over the idea of being able to show off digital art in such an extravagant manner.

One commenter hailed the necklace as the “biggest flex of the decade,” while others acknowledged that they would pay “ungodly” sums of money for the chain.

However, some questioned whether the necklace actually represented a breakthrough in the NFT world, noting that any kind of image or video could be displayed on the Apple Watch without the wearer actually “owning” the digital asset.

Others were more direct with their criticisms, describing the piece of jewelry as an example of the “stupidity” of NFTs.

While the technology has divided many in the art world, NFTs have fetched huge sums of money.

Last week, a self-portrait created by world-famous humanoid bot Sophia, and converted into an NFT, was sold for $688,888. The auction followed the sale of a collage of digital drawings, in the form of an NFT, which bagged $69 million.