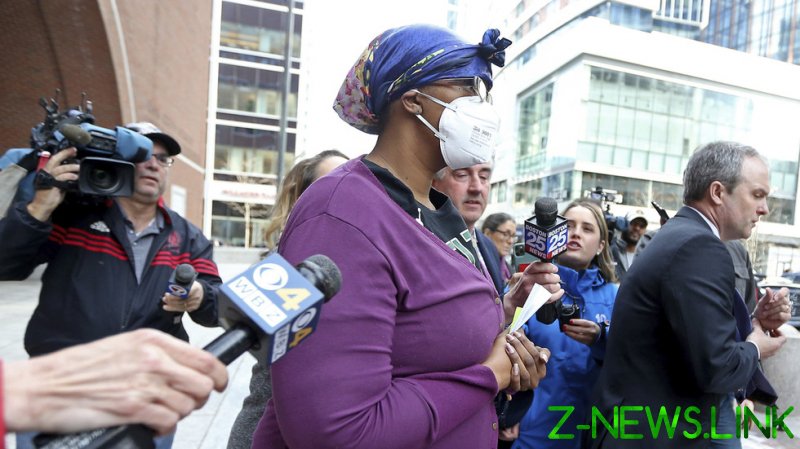 Black Lives Matter Boston leader Monica Cannon-Grant and her husband Clark Grant have been arrested for allegedly defrauding donors to their nonprofit. According to the 18-page federal indictment filed on Tuesday, the pair stole a “large sum” out of over $1 million in grants and donations to Violence in Boston.

While Cannon-Grant was released on her own recognizance and will even be permitted to continue working at the nonprofit twice a week, she is forbidden from handling the finances of the group, whose stated purpose is helping survivors of violence in the city.

Grant was arrested last October and has already been indicted on some of the charges his wife now faces, including lying on a mortgage statement, defrauding donors, and illegally collecting some $100,000 in Covid-19 unemployment benefits.

The pair allegedly used a $6,000 grant that was supposed to fund a trip to give at-risk young men “exposure to communities outside of the violence-riddled neighborhoods that they navigate daily” for their own purposes, dining out at Bubba Gump Shrimp Co. and Shake Shack, getting their nails done and going on a Wal-Mart shopping spree. Cannon-Grant also lied to the IRS and state attorney general’s office, claiming she had received no salary from the nonprofit even as she was cashing in to the tune of $2,788 per week starting in October 2020.

While the BLM leader has been well known in Boston activist circles for years, she appeared on the national radar in July 2020, when she accused a political opponent of “riding white penises” in a bizarre outburst. While campaigning for Democrat Ayanna Pressley, Cannon-Grant lashed out at her opponent, Republican Rayla Campbell, as a race traitor for marrying a white man.

Campbell called the charges against Cannon-Grant “a good day for justice,” accusing her erstwhile rival of taking a movement meant to “bring about meaningful change” and perverting it into “the politics of personal destruction and hatred.”

Cannon-Grant is far from the first prominent Black Lives Matter figure to be caught with her hand in the proverbial cookie jar. Last march, a BLM activist in Georgia was indicted on four counts of fraud for allegedly ripping off hundreds of thousands of dollars from donors to his Black Lives Matter of Greater Atlanta Facebook page, even though he had officially left the group. Instead of turning over the cash to the organization, he used it to buy luxury goods and plane tickets.

Patrice Cullors, the “trained Marxist” who co-founded the Black Lives Matter Global Network Foundation, quit the group last May after it emerged that she had spent millions of dollars on real estate, even while she claimed never to have taken a salary. Cullors insisted her resignation had nothing to do with the revelation of her deep pockets, claiming the “time was right” for her to focus on a book and TV deal.