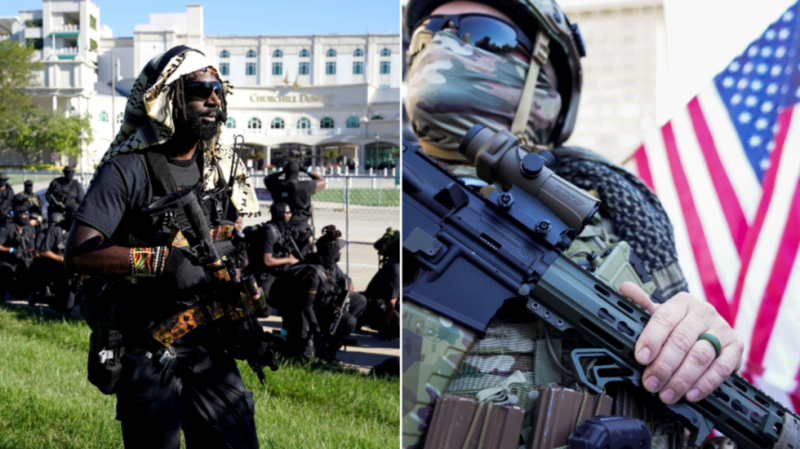 Dressed in black combat fatigues and carrying rifles, around 200 members of the Not F*****g Around Coalition (NFAC) gathered in Louisville on Saturday. Having checked their weapons, they marched to a park just outside the Churchill Downs track, where they posed in formation, kneeled, and otherwise demonstrated their resolve to fight for racial justice.

Simultaneously, a large group of Black Lives Matter, Until Freedom and other activists also marched to track, chanting “No Justice, No Derby,” blasting the city for holding recreational and leisure “celebrations” while the country is gripped by “systemic racism.”

While rallying for the same cause, the unarmed protesters distanced themselves from NFAC, which previously made clear they “believe in violence” and were ready to use force, if necessary.

Earlier in the day, a 250-strong group of armed self-declared pro-police “Patriots” dressed in tactical gear marched downtown. Carrying US flags and chanting “USA!” and “Back the Blue!”, the group declared they were sick and tired of the chaos and anarchy across the country, and Louisville in particular. 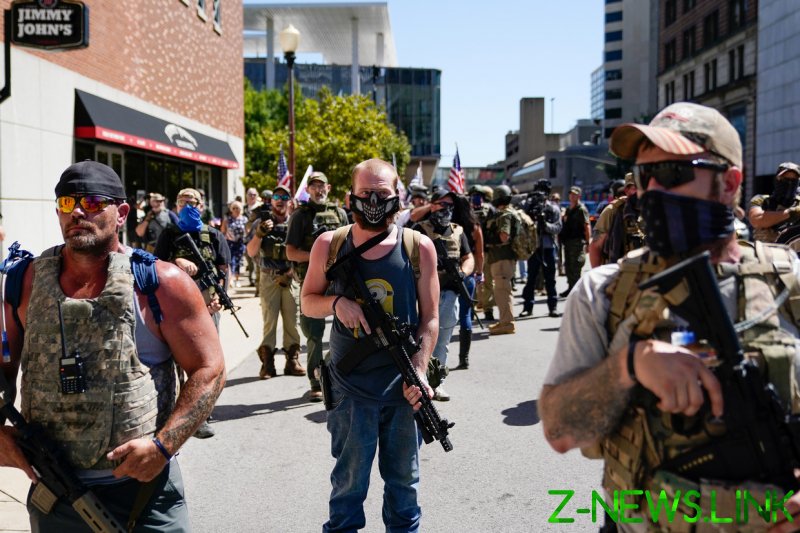 Near Jefferson Square Park, the “Patriots” were met by a group of BLM protesters. Amid a tense standoff – in the absence of police, who decided to “let groups exercise rights” – rival activists kept yelling at each other, but refrained from violence.

Police officers moved in to separate the groups only once the majority of both camps dispersed, local media reported. A total of three people were arrested over the course of day – for criminal mischief, marijuana possession and possession of a gun by a convicted felon – but none of them were related to the Churchill Downs rallies or Jefferson Square Park standoff.

As for the annual historic race, which due to coronavirus was postponed, held without spectators, the Kentucky Derby also went smoothly (fenced-off and under a heavy police guard). Authentic, ridden by John Velazquez, claimed victory – but it wouldn’t be 2020 if the champion didn’t get spooked and knocked down several people in the Winner’s Circle.