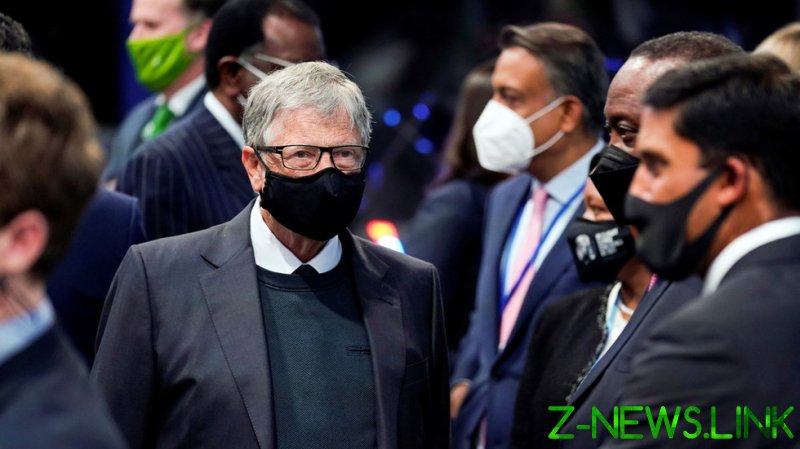 Gates made his comments during a discussion with the chair of the Health Select Committee and former UK Health Secretary Jeremy Hunt at the COP26 summit this week.

“It’ll take probably about a billion a year for a pandemic Task Force at the [World Health Organization] level, which is doing the surveillance and actually doing what I call ‘germ games’ where you practice,” Gates said. He gave a ‘what-if’ scenario of bioterrorists releasing smallpox in multiple airports as a potential “germ game” that could be used to prepare for an attack.

Gates says his “global pandemic task force” must be financed sooner rather than later and should be a “priority” due to the coronavirus pandemic.

“The next year will be where those allocations have to get made, including this global pandemic task force,” he said, adding that both the US and UK will need to spend “tens of billions” on research and development first.

This research and development, Gates said, would include making vaccines cheaper, obtaining “big factories,” and “eradicating” common colds and the flu.

The fourth-richest man in the world has found himself embroiled in odd controversies since the start of the Covid-19 pandemic, with many questioning the billionaire’s motives for being so involved in vaccine distribution. Gates himself eventually felt compelled to address some of the wild claims by conspiracy theorists. He has also made headlines for predicting a global pandemic years before Covid-19.

The Microsoft founder’s new idea for a global task force worth billions running around playing “germ games” had many scratching their head. Some criticized Gates himself, while others detested the idea of giving governments more authority to prepare for another pandemic.

During his discussion with Hunt, Gates also said there needs to be a “new way” to create vaccines that works to stop transmission better, something that could be developed through his expensive idea for global research and development on potential pandemics.