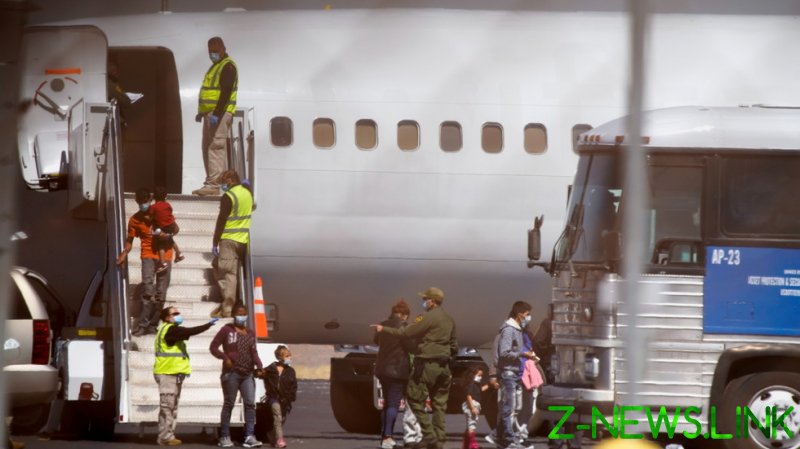 Abbott’s executive order GA-37, issued on Wednesday, violates the federal supremacy clause of the US Constitution and “causes injury to the US and to individuals whom the US is charged to protect, jeopardizing the health and safety of noncitizens in federal custody, risking the safety of federal law enforcement officers and their families, and exacerbating the spread of [Covid-19] in our communities,” Garland’s Justice Department argued in the lawsuit, filed on Friday in the Western District of Texas in El Paso.

The order “obstructs the Federal Government’s arrangements with nongovernmental partners and directly interferes with the administration of federal immigration law,” the lawsuit added. The DOJ seeks to have the order declared unconstitutional and blocked from being implemented.

The order would have given Texas state troopers the authority to pull over any civilian vehicle suspected of transporting migrants that could potentially be infected with the virus. The troopers would have also been able to either seize the vehicles or escort them to the point of original entry.

Responding to the lawsuit, Abbott fired back, accusing the Biden administration of creating “a constitutional crisis between the federal government and the State of Texas” by its “refusal to enforce immigration laws and allow illegal immigrants with [Covid]-19 to enter our country.”

President Joe Biden has “long-since abdicated” his authority and responsibility “to protect and uphold our nation’s sovereignty,” and instead “knowingly imports” infected immigrants across the border, Abbott added.

Arguing he has the duty and responsibility to protect Texans, and the authority under emergency laws used to deal with the pandemic, Abbott vowed to continue doing so “until President Biden and his Administration do their jobs to enforce the laws of our nation and protect Americans.”

“Not on my watch! Texas will not back down,” added the state attorney general Ken Paxton, vowing to fight the DOJ in court.

More than a million migrants have poured across the US-Mexico border since January, when Biden took office and swiftly reversed most of his predecessor Donald Trump’s immigration policies, calling them cruel and inhumane. Though the Biden administration has officially urged asylum-seekers from Central America not to come, it has also relaxed asylum rules, given more leeway to prosecutors not to press charges, and allowed migrants previously waiting in Mexico to cross into the US.

Tens of thousands of migrants have also been released inside the US without being given court dates, told only to check in with Immigration and Customs Enforcement offices in towns where they decide to settle. Thousands have been put on buses or flown around the country. Biden has also endorsed offering citizenship to several categories of migrants currently in the US, who would not normally be eligible for it, as part of the upcoming budget bill.

Texas and to a lesser extent Arizona, both governed by Republican governors, have protested the federal government’s policies and deployed additional police and even National Guard troops to the border in order to help with the ongoing emergency.