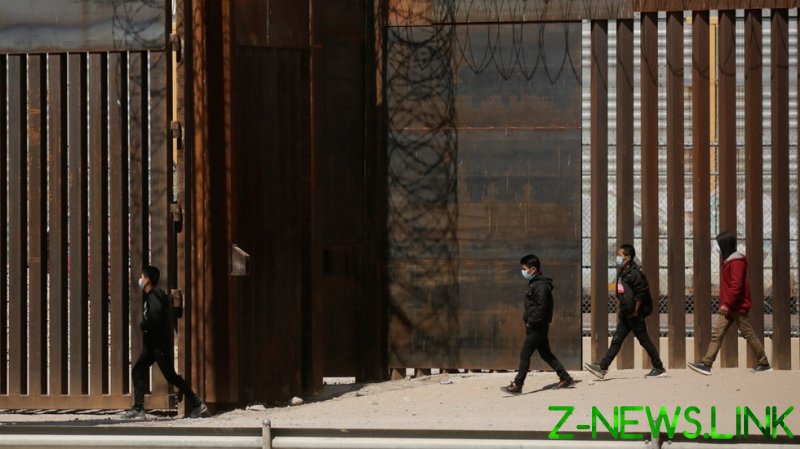 More than 4,200 minors were being held in “jail-like” holding facilities near the US’ southern border as of Sunday morning, according to a CBS News report on Monday. Nearly 3,000 of these children were being held past the legal limit of 72 hours, after which Customs and Border Protection (CBP) is required to hand them over to the Office of Refugee Resettlement (ORR) for more permanent lodgings.

The number of children in custody represents a 31-percent increase in just one week. Last week, 3,200 kids were in detention, a record high. These children told visiting lawyers that they have gone hungry, and must sometimes wait seven days for a shower.

The Biden administration on Saturday ordered the Federal Emergency Management Agency (FEMA) to deploy to the frontier to help process the new arrivals, with Department of Homeland Security head Alejandro Mayorkas saying “a Border Patrol facility is no place for a child.” FEMA, he said, will help “safely receive, shelter and transfer” them into more suitable accommodation.

When migrant children were held in CBP facilities during Donald Trump’s time in office, Biden and his fellow Democrats furiously condemned Trump and his hardline immigration policies. Biden called Trump “inhumane” on the campaign trail, and in a much-publicized photo opportunity, New York Congresswoman Alexandria Ocasio-Cortez cried for the press in the parking lot of one Texas detention center.

The same facilities, dubbed “concentration camps” by Ocasio-Cortez, are back open and over capacity under Biden. But with the shoe on the other foot and a Democrat in the White House, the party’s tone has changed. Biden’s Press Secretary, Jen Psaki, has repeatedly refused to call the situation at the border a “crisis,” and told reporters that “this is not kids being kept in cages. This is a facility that was opened that’s going to follow the same standards of other HHS [US Department of Health and Human Services] facilities,” referring to the re-opening of one Texas facility operational during the Trump years.

House Speaker Nancy Pelosi, meanwhile, has described the deteriorating situation at the border as Trump’s fault. “What the (Biden) administration has inherited is a broken system at the border, and they are working to correct that in the children’s interest,” Pelosi said on Sunday in an interview with ABC News. Mayorkas, too, blamed Trump for the surge in illegal immigration. “To put it succinctly,” he told reporters last month, “the prior administration dismantled our nation’s immigration system in its entirety.”

As well as blaming Trump personally, Mayorkas on Saturday suggested that “ongoing violence, natural disasters, food insecurity, and poverty in the Northern Triangle countries of Central America” have driven the flood of migrants toward the US.

Conservatives, however, have blamed the crisis on the actions of Joe Biden. Immediately upon entering office, Biden overturned or modified most of Trump’s immigration policies by executive order. One change, an exemption to Trump’s policy of turning back all border crossers during the Covid-19 pandemic for under-18s, can be directly linked to the current influx of children.

Policy decisions aside, critics have blamed Biden’s soft tone on the campaign trail, as well as his promise to pass a bill guaranteeing citizenship for illegal immigrants already in the US, for inviting more migrants to make the journey north. It’s not just conservatives who have connected Biden’s words with the influx. “Sensing a change in tone and approach after Mr. Trump’s defeat, migrants are once again…heading north toward the United States,” the New York Times wrote last week.

Upon arrival, these children face a reception no different from that offered under Trump, save for the fact that Biden has done little to deter them from crossing into the US in the first place. Meanwhile, his Democratic colleagues continue their public relations campaign to portray the lousy conditions in the detention centers as somehow different from the past four years.

“I trust the Biden administration’s policy to be based on humanitarian and love of children rather than political points,” Pelosi said at a press conference last Thursday.