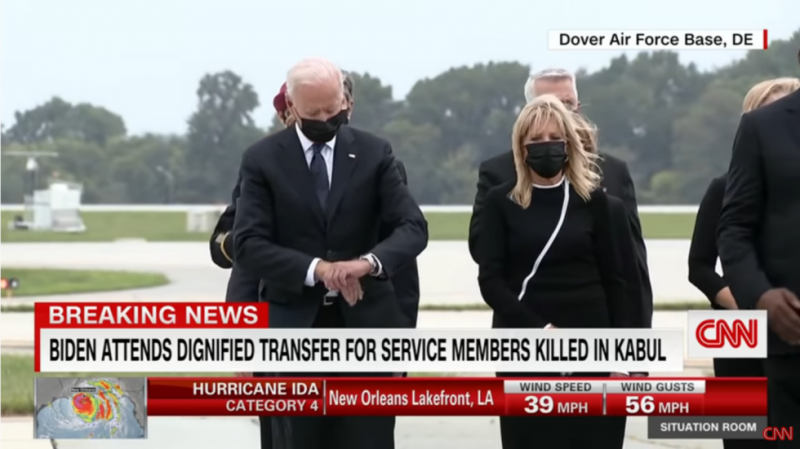 The incident occurred on Sunday during a so-called dignified transfer ritual at Dover Air Force Base in Delaware. Biden and First Lady Jill Biden stood along with military leaders, Secretary of State Anthony Blinken and family members of the deceased as caskets of the fallen service members were brought off a plane.

Biden and the other dignitaries stood with hand over heart or saluting as the caskets were carried past them, then lowered their hands after each coffin was loaded into a van. But at one point, the president held up his left wrist and appeared to check the time while bringing his right hand down from over his heart.

“The man responsible for the deaths of 13 soldiers checks his watch while the solders’ caskets are being carried into trucks right in front of him,” Vince Langman, a supporter of former President Donald Trump, said on Twitter. “Apparently, Joe Biden had better things to be doing. Disgusting.”

The solemn ceremony marked repatriation of the bodies of 11 Marines and two other service members who were killed in Thursday’s terrorist bombing at the Kabul airport, which was the deadliest attack suffered by the US military in more than a decade. Critics, including the mother of one of the fallen Marines, have ripped Biden for a chaotic US withdrawal from Afghanistan, which they said unnecessarily put American troops in harm’s way.

Conservative writer Nicholas Fondacaro was among those mocking Biden for the watch-checking incident. “Nap time or ice cream time?” he tweeted. “What was Biden missing that he needed to check his watch in the middle of a solemn ceremony?”

Conservative commenter Dave Quesada called the apparent gaffe a “low-class move by this disrespectful clown” and challenged Biden supporters to defend the president. “Your work is never done,” he said.

Self-described “part-time gamer” John Wylie did just that, saying Biden “also lost his military son,” and speculated that the watch had belonged to the late Beau Biden. “We really don’t have to go that low, man,” he said of one Biden critic.

The younger Biden died of brain cancer in 2015, seven years after he deployed to Iraq as an Army lawyer. There’s no indication that the president was wearing his son’s watch. There was similar speculation when he wore an $8,000 Rolex to his inauguration in January, stirring some controversy, but media fact checkers said the watch was a gift from his wife.

Other defenders suggested that looking at his watch during the ceremony shouldn’t be a big deal to anyone. “People who are time conscious look at their watches,” one commenter said. “That doesn’t mean he thinks this is unimportant.”

The behavior may be somewhat of a habit for Biden, who has sparked criticism previously by checking the time at such awkward moments as during a presidential debate and while former President Barack Obama spoke to Saudi Arabian King Salman. He followed up the Dover ceremony on Sunday by checking his watch again during a briefing on Hurricane Ida at FEMA’s headquarters.

The Dover incident came one day after Biden was ridiculed for allegedly falling asleep during a White House meeting with Israeli Prime Minister Naftali Bennett. But CNN reporter Daniel Dale refuted the accusations, saying Biden was merely looking downward with his hands moving and replied right away when Bennett finished speaking.