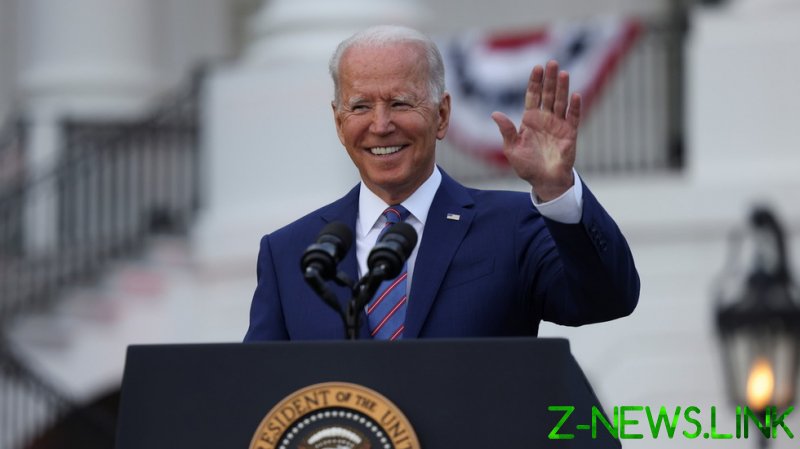 “My fellow Americans, that’s the most patriotic thing you can do, so, please, if you haven’t got vaccinated, do it now: for yourself, for your family, for your community and for your country,” Biden said, speaking from the south lawn of the White House on Sunday.

Biden credited his administration for getting the US economy back on track, claiming that it was “roaring back” from the days when most of the country was plunged into lockdowns and Americans had their freedom of movement severely restricted by stay-at-home orders.

“We’re seeing record job creation and record economic growth — the best in four decades and, I might add, the best in the world,” Biden said, addressing a 1,000-strong crowd gathered at the lawn.

Drawing parallels between the time 13 American colonies declared independence from Britain in 1776 and the fight against Covid-19, Biden said while the US still hasn’t “vanquished” the disease, it is “closer than ever to declaring our independence from a deadly virus.”

Biden argued that persuading as many Americans as possible to get the jab is the only way to combat the Delta variant of the virus, which is considered to be times more infectious than previous mutations, and to “protect the hard-won progress we’ve made.”

While Biden’s speech mostly focused on the role vaccination plays in the return to life as normal, the president appealed to his political opponents, arguing that a united front is needed to “beat the virus” and “rescue” the nation from “division and despair.”

“When we see ourselves not as Republicans or Democrats, but as Americans, then there is simply no limit to what we can achieve,” Biden said. So far, six months into the Biden presidency, the American public remains polarized, including increasingly on the issue of vaccination.

A Washington Post-ABC News poll, released Sunday, found that only 45% of Republicans have received at least one Covid-19 vaccination dose, while 86 % of Democrats have already done so. A total of 29% of Americans say that it’s unlikely they get vaccinated, among them 47% of Republicans and 6% of Democrats. Biden’s vaccination campaign, which fell short of the 70 percent vaccination rate goal set for Independence Day, is hindered not only by the pushback from the conservatives. The same poll showed that about 35 percent of independents say they are unlikely to get the jab either.