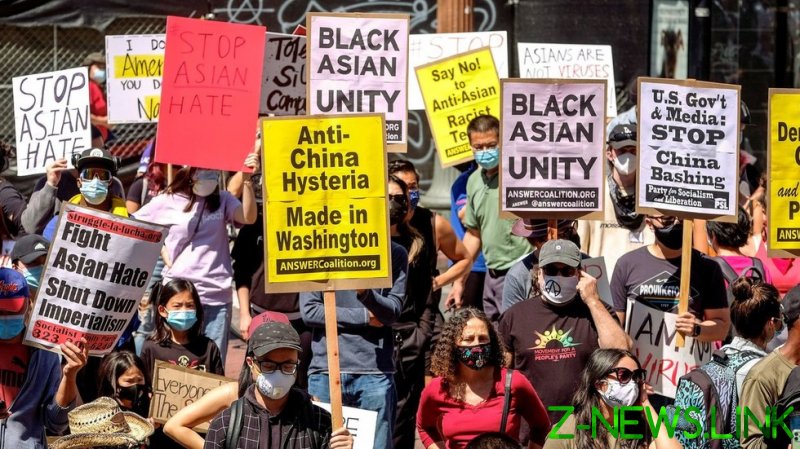 On Tuesday, the White House rolled out a “fact sheet” about the actions President Joe Biden is taking to “respond to the increase in acts of anti-Asian violence, and to advance safety, inclusion, and belonging for all Asian American, Native Hawaiian, and Pacific Islander communities.”

The US government has long lumped all people with ancestry from the world’s largest continent and the world’s largest ocean under together in the “AAPI community.” To establish Biden’s good faith towards this category of Americans, the White House noted that he has “created a historically diverse Administration in which 15 percent of all appointees identify” as AAPI.

Persons of Asian ancestry getting assaulted on subway trains and streets should apparently rejoice in knowing that Biden is re-establishing the White House Initiative on Asian Americans and Pacific Islanders, “with initial focus on anti-Asian bias and violence,” and in particular “anti-Asian violence at the intersection of gender-based violence.”

There will be a committee on the White House Covid-19 Equity Task Force on “addressing and ending xenophobia against Asian Americans,” as well as a subcommittee on “Structural Drivers of Health Inequity and Xenophobia,” to make sure the US government’s response to the pandemic also “mitigates anti-Asian xenophobia and bias.”

Among other government initiatives are $49.5 million in grants from the Department of Health and Human Services (HHS) to “community based, culturally specific services and programs for survivors of domestic violence and sexual assault.”

The Civil Rights Division at the Justice Department is restarting the Hate Crimes Enforcement and Prevention Initiative, and updating its hate crimes website with Chinese, Korean, Tagalog, and Vietnamese translations. The FBI is going to publish a new, interactive hate crime page to spotlight reports of anti-Asian attacks.

The National Endowment for the Humanities is launching a “virtual library” to “explore and celebrate Asian Americans’ contributions to the United States” and address the history of anti-Asian discrimination and racism.

Meanwhile, at least some of the 100 grants worth $33 million dollars doled out by the National Science Foundation will go to “research to understand, address, and end bias, discrimination and xenophobia, including against AAPI communities” and have “diverse researchers” develop “more effective strategies for reducing the frequency and severity of discrimination experienced by historically underrepresented groups.”

Biden’s list of initiatives appears to be grounded in the narrative embraced by Democrats and the mainstream media over the past year, that the drastic increase in verbal and physical attacks on Asians has been driven by bigoted Americans blaming them for the novel coronavirus first appearing in China. This bigotry, again according to the media, was promoted and stoked by none other than former president Donald Trump and his supporters.

While the Biden administration hasn’t removed any of Trump’s tariffs on Chinese goods, it has withdrawn lawsuits against Ivy League universities alleging that they discriminated against Asian applicants, and made“equity” – equality of outcomes, which requires discrimination against some groups and in favor of others – a cornerstone of its foreign and domestic policies.

The Democrats’ insistence on treating the problem through critical race theory has not sat well with at least some Asian-American groups. In February, the New York chapter of the Chinese American Citizens Alliance (CACA) – the oldest Asian-American civil rights group in the US – denounced critical race theory as “hateful, divisive, manipulative fraud” and a true hate crime against Asians by itself.