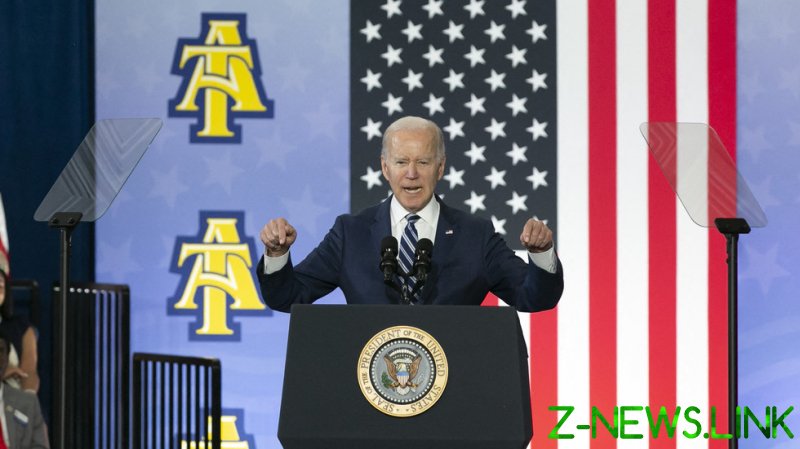 US President Joe Biden has been widely mocked following a public appearance on Thursday. After delivering a speech in North Carolina, he appeared to offer a handshake with no one there to receive it.

The president visited North Carolina A&T State University in Greensboro to make a 40-minute address on the economy. After finishing his remarks on how his administration has worked to rebuild supply chains and kickstart an economic recovery, Biden turned right and stretched his hand out as if he was offering it for a handshake. He then turned his back to the audience and stood for a second or two, before walking off the stage.

Biden’s political opponents interpreted the hand gesture as the latest episode of apparent confusion, which the 79-year-old politician has demonstrated on several occasions during his presidency.

Richard Grenell, who served as US ambassador to Germany and acting director of national intelligence in the Trump administration, called it a moment of “weakness” that the entire world sees. GOP Senator Ted Cruz tweeted an eyes emoji in response to footage of the episode. Representative Marjorie Taylor Greene said it is “incredibly embarrassing” to have Biden as president.

Some Twitter users said Biden wanted to shake hands with an imaginary friend or a ghost. Others gave him the benefit of the doubt. “It was clearly a hand gesture (a playful ‘How’s that?’) to his people,” one self-described “solidly on the right” user said, dismissing Grenell’s criticism.

Since the 2020 presidential campaign, Biden has been far less energetic than in previous years. On several occasions, he has appeared to drift in his train of thought when making public addresses or speaking to the media. Critics claim these are signs of deteriorating mental capacity, which Biden supporters deny.