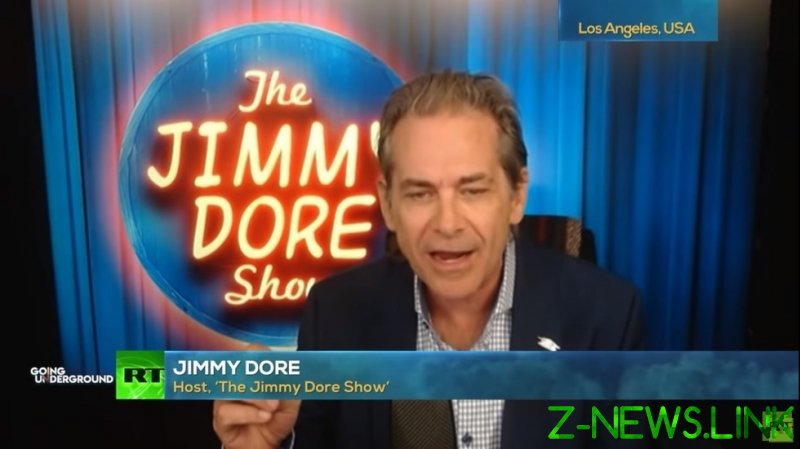 “The idea that Joe Biden is the antidote to Donald Trump – when he has a worse record – is mental gymnastics, games that people have to play in their head, because they can’t stand [Trump] being such a jacka** on television,” Dore told Afshin Rattansi during Monday’s broadcast.

Biden is a “warmonger,” Dore said. “He’s been for every war I can ever think of.” He also has a record of backing big banks, Wall Street, health insurance lobbies – and authoring the 1994 crime bill that filled America’s prisons with black and brown people, Dore pointed out.

Biden’s running mate, Senator Kamala Harris, has also had a hand in that. Harris was previously attorney general of California, Dore noted, and resisted orders to release inmates from overcrowded prisons because that would hurt industries dependent on prison labor.

Dore has hosted a comedy news show since 2009 and leans progressive. He is no fan of Trump, but felt it necessary to point out that Trump’s presidency has brought criticism of policies the media kept quiet about when implemented by his predecessors.

In the Democratic primaries, Dore backed Vermont Senator Bernie Sanders and Hawaii Congresswoman Tulsi Gabbard, only to see them “smeared” with ‘Russiagate’ by the media and the establishment.

“Bernie Sanders is such a chump, he went along with it, he red-baited himself during the campaign!” Dore told Rattansi.

He says the notion floated by some progressive Democrats that Biden can be pressured into moving left after the election is “just nuts, it’s immature, it’s ridiculous.”

Whoever wins on November 3, Dore said, it will be a victory for “Goldman Sachs, the military-industrial complex and the health insurance companies. That’s who’s winning. They’ve won every election in my lifetime.”