Biden invites Putin to crunch summit amid deteriorating ties between Russia & US, as American warships chart course for Black Sea 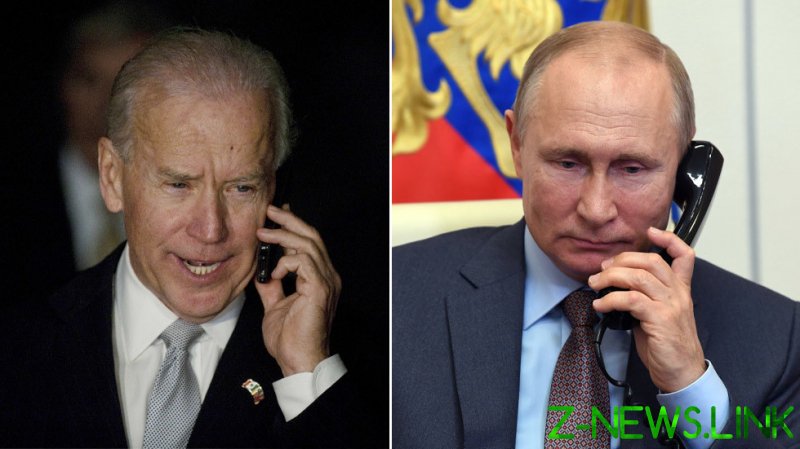 In a statement published on Tuesday, American officials confirmed that the two leaders had spoken about “a number of regional and global issues.” As part of the talks, Biden was said to have “voiced concerns over the sudden Russia military build-up” on the Crimean Peninsula and along the border with Ukraine, calling upon Moscow “to de-escalate tensions.”

The exchange comes amid widespread fears that fighting in the Donbass region between Kiev’s forces and fighters from Moscow-backed self-declared republics could spill over into a full-blown conflict. The new standoff follows a large-scale mobilisation of troops and materiel by Kiev, which prompted Russia to beef up its own military presence near its Western frontier.

Some in the West have asserted that Moscow may be planning to invade Ukraine, but such claims have been met with dismissal by Russian officials. Meanwhile, in a move widely interpreted as a show of support for Ukraine, Washington has reportedly dispatched two warships to the Black Sea.

The Kremlin has described the situation on the contact line in the Donbass as “frightening,” and Russian diplomats have previously expressed concerns to their American counterparts. However, State Department spokesman Ned Price said Washington was concerned about “credible” reports of Russian troop movements near the shared border, and issued a “call on Russia to refrain from escalatory actions.”

Relations between the two countries have deteriorated markedly in the past few months, with Moscow recalling its ambassador for emergency talks about the future of ties with Washington.

Anatoly Antonov flew home in the wake of an interview in which Biden was asked whether he believed Putin is “a killer.” “Mmhmm, I do,” the US president replied. His words sparked a furious response from numerous Russian officials.

However, Putin himself was more circumspect, saying that “when I was a kid, when we were arguing with each other in the playground, we used to say, whatever you say [about others] is what you are yourself.” He noted that Washington is “determined” to have a relationship with Moscow, but only on “issues that are of interest to the United States itself.”

Notably, the American summary of the call highlighted that Biden has a goal to build “a stable and predictable relationship with Russia, consistent with US interests.” It added that the proposed summit, billed to take place within the next few months, would allow the two leaders to “discuss the full range of issues facing the US and Russia.”

In its own record of the call, issued later on Tuesday, the Kremlin said that Biden had “expressed interest in normalizing bilateral relations,” and had been able to find potential common ground on arms control, as well as the Iranian nuclear program, the situation in Afghanistan and global climate change. Russian officials will now be instructed to “work out issues raised during the telephone conversation,” potentially including the request for a personal summit.

If the meeting goes ahead it will be the first of its type since Putin met with Biden’s predecessor, Donald Trump, in Helsinki in 2018. While the former president hailed the dialogue as “deeply productive,” the head-to-head meetings were tense, and any planned charm offensives were marred by domestic pressure on Trump to condemn alleged Russian interference in the country’s 2016 election.

There has been skepticism in Moscow that the White House is prepared to compromise sufficiently for constructive talks to take place. In comments to journalists a fortnight ago, Kremlin spokesman Dmitry Peskov said that “no one will allow America to speak with Russia from a position of strength.” Instead, he argued, the two nations must treat each other as equals.