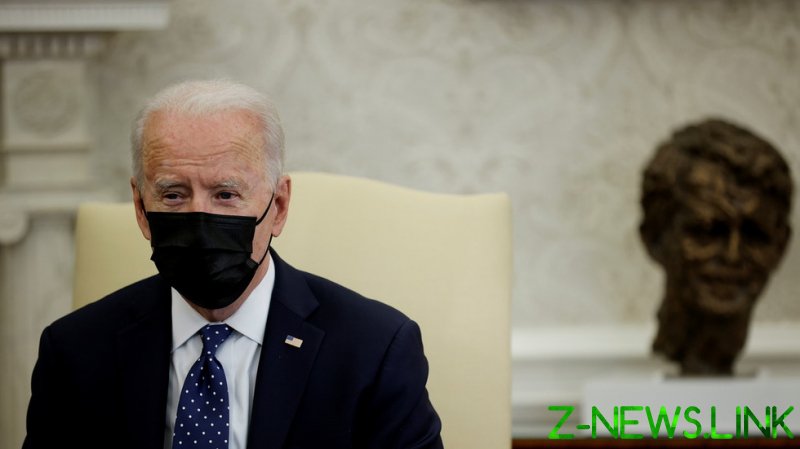 Speaking with reporters on Tuesday, Biden said he had phoned Floyd’s family the day before, waiting until the jury was sequestered to begin deliberations in the case.

“They’re a good family and they’re calling for peace and tranquility no matter what that verdict is,” Biden said. “I’m praying the verdict is the right verdict. It’s overwhelming, in my view. I wouldn’t say that unless the jury was sequestered now.”

Biden said he only brought it up because Floyd’s brother Philonise appeared on NBC’s ‘Today Show’ earlier in the day and mentioned the call. According to Philonise Floyd, Biden “knows how it is to lose a family member … so he was just letting us know that he was praying for us and hoping that everything would come out to be OK.” Biden’s wife and infant daughter were killed in a car crash in 1972, and his son Beau died of cancer in 2015.

George Floyd died on May 25 last year, while being arrested by Chauvin for allegedly passing a counterfeit bill. Prosecutors insist Chauvin kneeling on Floyd is what caused his death, while his defense has argued the African-American man had a fatal dose of fentanyl in his system.

Biden’s remarks alarmed even his sympathizers in the corporate media. “How about waiting until after the verdict?” tweeted the Washington Post’s chief fact-checker Glenn Kessler. “Public figures should let a jury do their job before commenting.”

The president’s desire for the “right verdict” also comes after the judge in the trial clearly warned public officials not to comment on it.

“I wish elected officials would stop talking about this case, especially in a manner that is disrespectful to the rule of law and to the judicial branch and our function,” Judge Peter Cahill said on Monday. “I think if they want to give their opinions, they should do so in a respectful [way] and in a manner that is consistent with their oath to the Constitution to respect a coequal branch of government. Their failure to do so, I think, is abhorrent.”

Cahill said this after denying the defense’s motion for a mistrial on grounds of remarks by Congresswoman Maxine Waters (D-California), who traveled to Minneapolis and told rioters to “get more confrontational” if Chauvin isn’t found guilty of murder.

The judge said the defense might have a case on appeal, but dismissed the comments by Waters by saying “a Congresswoman’s opinion really doesn’t matter a whole lot.” He hasn’t said whether the opinion of a sitting president might matter more.

Following the judge’s warning, however, Minneapolis Mayor Jacob Frey made a public statement that, regardless of the verdict, the “one true reality” was that “George Floyd was killed at the hands of police.”

Floyd’s death last year sparked Black Lives Matter protests that quickly turned into riots and spread across the US. Local, state, and federal authorities have been preparing for a repeat performance.

A senior Justice Department official told AP, on condition of anonymity, that the DOJ has dispatched “specially trained community facilitators” to Minnesota ahead of the verdict.

The Pentagon received a request from Washington, DC officials for National Guard forces in case of “civil unrest” in the capital, spokesman John Kirby confirmed on Monday. The same day, White House press secretary Jen Psaki said the Biden administration was having a “range of conversations” about preparing for the upcoming verdict.

“Of course we’ll let the jury deliberate and we’ll wait for the verdict to come out before we say more about our engagements,” she added.