Home / WORLD / Biden finally takes questions on Afghanistan, says Kabul evacuation ‘one of the most difficult airlifts in history’

Biden finally takes questions on Afghanistan, says Kabul evacuation ‘one of the most difficult airlifts in history’ 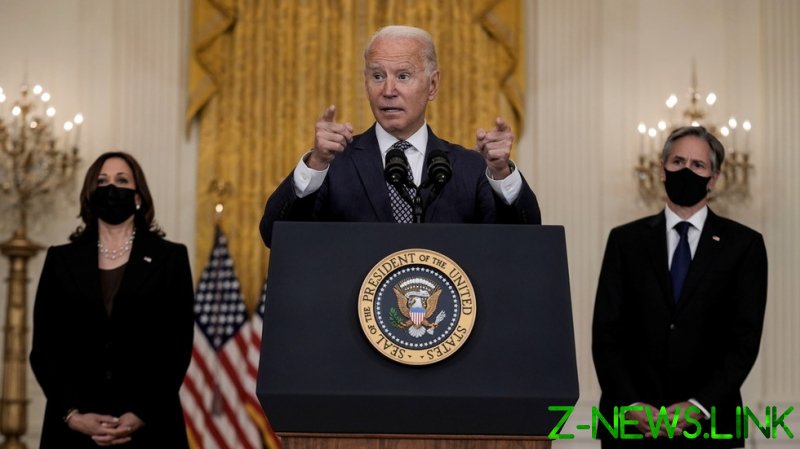 Scheduled to appear at 1pm local time at the White House, Biden ran almost an hour late, eventually addressing the press flanked by masked-up Vice President Kamala Harris and Secretary of State Antony Blinken. He tried to put a brave face on the situation, saying the US has “made significant progress” in evacuating Americans from Kabul.

“This is one of the largest, most difficult airlifts in history,” he said, adding that the US is the “only country in the world capable of projecting this much power” at such a distance, referring to the almost 6,000 troops from the 82nd Airborne, 10th Mountain and 24th Marine Expeditionary divisions currently guarding the Hamid Karzai International Airport.

Almost 13,000 people have been evacuated so far – including 5,700 on Thursday – but flights had to be “paused” for hours on Friday until more evacuees could be “processed,” Biden said. In addition to Americans, the US is looking to evacuate not just Afghan interpreters (recipients of ‘SIV’ visas), but also women leaders and NGO workers who might be threatened by the Taliban government.

He followed that up by repeating Monday’s arguments for ending the war, before admitting he forgot the first part of the question – about getting Afghans who wanted to leave out alongside US citizens.

Asked about how confident he was that the US would be able to react to a possible terrorist resurgence, given the unexpected collapse of the Afghan government and the Taliban takeover, Biden called that “apples and oranges” and reverted to talk about the US’ “over-the-horizon” capability to deal with terrorists.

He also dismissed a recently revealed “dissent cable” from the State Department, saying he got “all kinds of advice” and went with the “consensus opinion” about what would happen, before adding, “I made the decision. The buck stops with me.”

While French, German and British troops have ventured into Kabul to escort their citizens to the airport, Biden has not committed to having the US troops do the same – hinting at one point that all options were on the table, but then trying to explain why that wasn’t feasible. He did note that US forces at the airport provided “overwatch” to the allies, and helped 169 Americans get “over the wall” and into the compound, rather than face Taliban checkpoints.