Biden doubles down on Putin comments 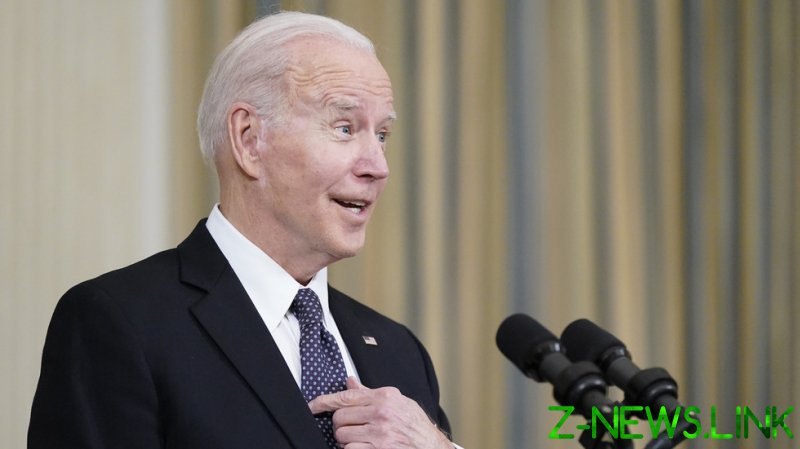 US President Joe Biden on Monday stood by his claim that Russian President Vladimir Putin should not remain in power, but insisted that it was his expression of moral outrage over the conflict in Ukraine and not a policy change, and that nobody was supposed to take it seriously.

Biden unveiled his 2023 budget proposal at the White House on Monday, but the press corps was far more interested in the remarks he made during last week’s trip to Poland – including when he said about Putin, “For God’s sake, this man cannot remain in power,” a remark widely interpreted as calling for regime change in Moscow.

“I’m not walking anything back,” Biden said when asked about it on Monday. “I want to make it clear: I was not then, nor am I now, articulating a policy change. I was expressing moral outrage that I feel, and I make no apologies for it.”

Asked if his remarks complicated the diplomacy about ending the war, Biden said no, arguing that Putin’s “escalatory efforts” were what “complicates things a great deal, but I don’t think it complicates it at all.”

In response to another question about what he had meant in Warsaw, Biden said that “people like this shouldn’t be ruling countries,” again referring to Putin.

Another reporter reminded Biden of his extensive foreign policy experience – he sat on the Senate Foreign Relations Committee for years – and asked if he could see how his words could be interpreted as a policy statement, or used as propaganda by Russia.

Biden even insisted he never told US troops in Poland they were going to Ukraine when he said “when you get there, you’ll see,” or that the US would “respond in kind” to a hypothetical chemical attack by Russia, or that he called for regime change in Russia.

“None of the 3 occurred,” he told Fox News’ Peter Doocy. “You interpret the language that way.”

The US president said he was talking to the troops about “helping train the Ukrainian troops that are in Poland.”

As for the chemical weapons remarks, Biden shrugged it off.

On Saturday, White House aides hastened to “clarify” Biden’s remarks in Warsaw, telling reporters that whatever the president had said, what he meant was that Putin can’t be allowed to “exercise power over neighboring countries.”

Secretary of State Antony Blinken went a step further on Sunday, saying that “we do not have a strategy of regime change in Russia – or anywhere else, for that matter.”

By Monday morning, however, the official talking point was that Biden was just expressing a personal opinion.

“I think that speech that you saw was a reflection of his emotional connection to this issue and commitment to European security, to NATO and to Ukraine,” the White House Energy Security Coordinator Amos Hochstein told the Dubai Global Energy Forum. “I think it was a very emotional, very personal view,” Hochstein added, saying that in his opinion Biden “was not indicating a change of US policy and regime change.”