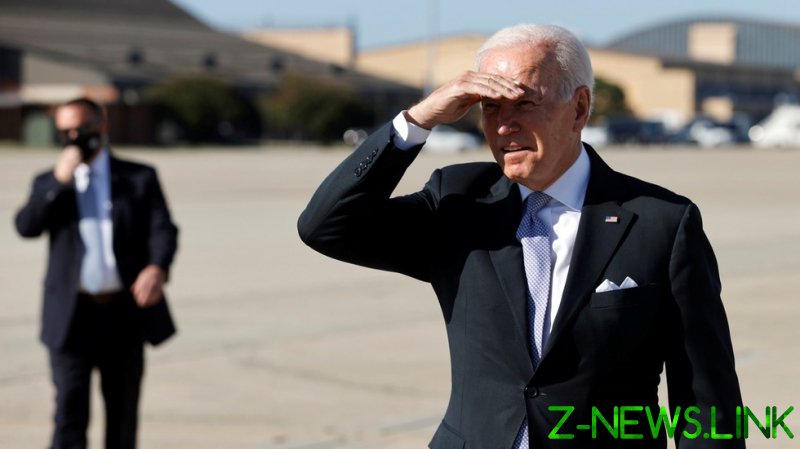 As Biden traveled to Pennsylvania on Wednesday, reporters asked him if he was concerned about Chinese hypersonic missiles.

Earlier in the day, White House spokeswoman Jen Psaki said that the US has raised concerns about the technology with China through “diplomatic channels,” without offering specifics.

Washington’s reaction followed last week’s reporting by Financial Times, alleging that the August launch by the Chinese military involved a glide vehicle that orbited the planet before swooping in on a target faster than the speed of sound. While it’s said to have missed the target, China’s “advanced space capability” came as a surprise to the US intelligence community, according to FT.

Beijing officially denied launching a hypersonic glider, however. Foreign Ministry spokesperson Zhao Lijian said last week that the test involved a spacecraft rather than a missile, and was of “great significance for reducing the use-cost of spacecraft, and could provide a convenient and affordable way to make a round trip for mankind’s peaceful use of space.”

Over the weekend, however, the state-backed outlet Global Times ran an editorial speculating that, if true, FT’s report means that the Chinese nuclear deterrence system has just dealt “a new blow to the US’ mentality of strategic superiority over China.”

Contrary to ballistic missiles developed during the Cold War, hypersonic missiles are capable of coming in fast and low, avoiding detection by radar until it is too late to launch countermeasures. Russia began developing the technology after the US withdrew from the anti-ballistic missile (ABM) treaty in 2001, and has so far fielded the air-launched Kinzhal and ship-launched Zircon weapons systems.

Meanwhile, the US has tried to kick-start its own hypersonic missile program. A Lockheed Martin prototype tested in 2020 failed, but the Defense Advanced Research Projects Agency (DARPA) announced in September that a missile developed by Raytheon – former employer of current Defense Secretary Lloyd Austin – successfully met “all primary test objectives,” bringing the Hypersonic Air-breathing Weapon Concept (HAWC) “one step closer to transitioning… to a program of record.”