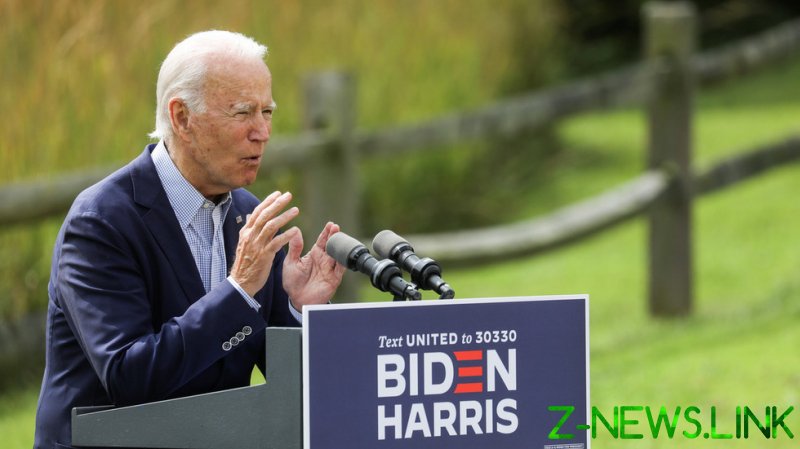 Accusing Trump of “climate denial,” Biden acknowledged the current president “may not have caused these fires and record floods and record hurricanes. But if he gets a second term, these hellish events will continue to become more common, more devastating and more deadly.”

While Trump has accused the Democrats of wanting to destroy America’s suburbs through encouraging rioting and abolishing single-family homes, Biden argued that the outskirts of cities will actually perish from wildfires, floods and superstorms instead if Trump remains in office.

“It shouldn’t be so bad that millions of Americans live in the shadow of an orange sky and are left asking, is doomsday here?” Biden said, referring to the smoke from wildfires currently devastating California and Oregon, whose smoke plumes have blotted out the sun.

Democrats governing both states have blamed climate change for the blazes, and have used them as yet another argument for ousting Trump from the White House. On Monday, Democrat mega-donor and failed contender for the 2020 nomination, Tom Steyer, argued on CNN that electing Biden was the “only solution” to the fires devastating California.

Over just the past 30 days, fires have burned over 2.8 million acres of land in California, in the worst fire season in the state’s history. While some of them were started by lightning strikes and fanned by seasonal Santa Ana winds, at least one major blaze began as a failure of pyrotechnics at a gender reveal party, and there have been multiple reports of arson as well.

While Governor Gavin Newsom insists that climate change is to blame, critics have pointed to years of California’s questionable forestry practices as contributing to the severity of the fires.

In addition to blaming the disasters on Trump, Biden pitched himself as the answer to environmental challenges, racism, poverty and homelessness. In the same speech in Delaware, he promised to build 1.5 million “new energy-efficient homes and public housing units” that would solve the affordable housing problem, help mitigate climate change and reduce the “racial wealth gap.”

He did not explain why none of that happened under the Obama administration, where he was vice-president for eight years, and left without taking questions from the press.