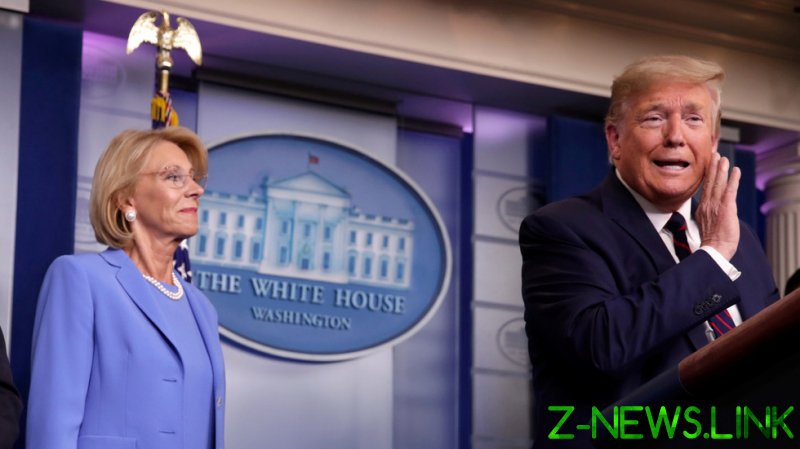 DeVos’ resignation was reported on Thursday evening, with the soon-to-be ex-secretary stating that President Donald Trump’s response to the unrest at the US Capitol this week was an “inflection point” in her decision, which will take effect Friday.

“We should be highlighting and celebrating your Administration’s many accomplishments on behalf of the American people,” Mrs. DeVos wrote in a letter addressed to Trump, first obtained by the Wall Street Journal. “Instead we are left to clean up the mess caused by violent protesters overrunning the US Capitol in an attempt to undermine the people’s business.”

One of Trump’s longest-serving cabinet members in an administration with break-neck turnover, DeVos’ resignation follows that of Transportation Secretary Elaine Chao, who quit her post earlier on Thursday. Though Chao noted that it had been the “honor of a lifetime” to serve under Trump, she blasted the president for instigating a “traumatic and entirely avoidable event” in Washington, DC, which she said “deeply troubled” her.

Beyond cabinet-level positions, a number of other Trump officials and staffers have either quit or considered doing so over the last 24 hours, among them Deputy National Security Advisor Matthew Pottinger and White House Deputy Press Secretary Sarah Matthews. Others believed to be contemplating whether to jump the president’s sinking ship include National Security Adviser Robert O’Brien and Deputy Chief of Staff Chris Liddell. Reuters, meanwhile, reported late Thursday that four others had handed in their resignations: Mark Vandroff, senior director for defense policy; Anthony Rugierro, senior director for weapons of mass destruction; and Rob Greenway, senior director for Middle Eastern and North African affairs.