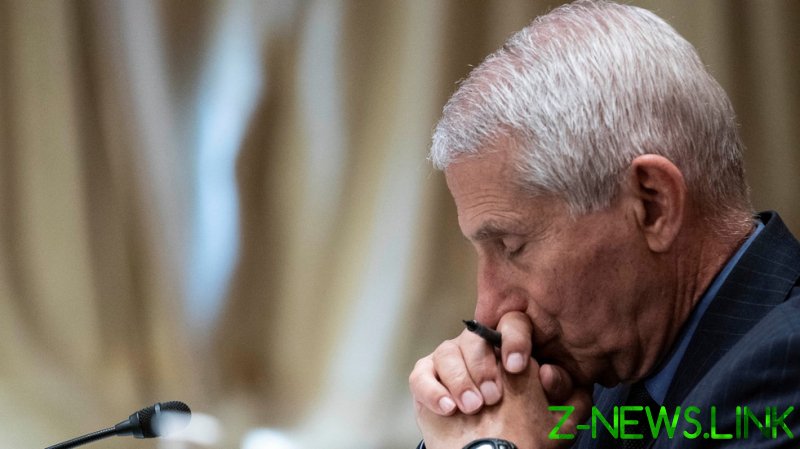 Fauci, the director of the Nat­ional Institute of Allergy and Infectious Diseases (NIAID) at the National Institute of Health, “did not alert senior White House officials before lifting the ban on gain-of-function research in 2017,” Australian journalist Sharri Markson claimed in a report published on Friday.

“It kind of just got rammed through,” one former Trump administration official told Markson. “I think there’s truth in the narrative that the (National Security Council) staff, the president, the White House chief-of-staff, those people were in the dark that he was switching back on the research.”

Markson – whose book ‘What Really Happened in Wuhan’ is scheduled to be published in September – claims that “multiple” Trump administration officials told her Fauci had not raised the issue of restarting funding for the virus research with senior White House staff.

While she does not quote anyone on the record, Markson said she “confirmed” that Fauci had not briefed then-CIA director Mike Pompeo or Matthew Pottinger, the Asia Director on the NSC who was in charge of the China policy.

Gain-of-function research, in which virologists experiment on pathogens in the lab to make them either more contagious or more fatal – in order to help prevent a pandemic – is a highly controversial practice that was subject to a lengthy moratorium by the US government. It became a topic of widespread interest due to the origin theory of SARS-CoV-2, the virus that causes Covid-19, which says it may have been accidentally released from the Wuhan Institute of Virology in China.

The NIH announced it was resuming gain-of-function research on December 19, 2017. It cited the Department of Health and Human Services guidance on such funding, released earlier that day. At the time of issuing the guidance, the HHS was run by acting secretary Eric Hargan. Secretary Tom Price had resigned at the end of September, over spending $1 million on private jets for travel. His replacement Alex Azar wouldn’t be sworn in until January 29, 2018.

If Fauci was responsible for pushing through the resumption of funding, that would directly contradict his own argument from a few years prior. In a 2012 article published in MBio, the journal of the American Society of Microbiology, Fauci said scientists alone should not decide on the fate of such research, which he described as risky but worth it.

While gain of function research is very important, Fauci argued, the researchers “can no longer be the only player in the discussion of whether certain experiments should be done.” The voluntary moratorium against such research – in effect at the time – is good and should continue, he argued, “until policy decisions could be articulated” with the help of global and national public opinion, experts and public officials. Two years later, in 2014, the Obama administration officially imposed a moratorium on funding gain-of-function research.

Bringing up that article, Markson highlighted Fauci’s admission that gain-of-function research is risky, with an example in which he cited a hypothetical case of a pandemic breaking out if a scientist doing the research becomes infected by accident.

“Scientists working in this field might say – as indeed I have said – that the benefits of such experiments and the resulting knowledge outweigh the risks,” he wrote.

Those words are now coming back to haunt him, as the notion that SARS-CoV-2 may have escaped from the WIV lab gains traction in the media – after being denounced as a “conspiracy theory” and actively suppressed for over a year. The only theory officially allowed was the zoonotic theory – that the virus had naturally evolved in bats and jumped to humans via another species, perhaps pangolins.

On Friday, former Trump administration official David Asher told Fox News that the odds of a natural origin of the virus were “extremely long” and called the zoonotic explanation “ridiculous.” Asher was in charge of the State Department probe into the origins of the virus, which the Biden administration shut down in March. He said the WIV was “the epicenter [sic] of synthetic biology in the People’s Republic of China, and they were up to some very hairy stuff with synthetic biology and so-called gain-of-function techniques.”

Fauci has denied any wrongdoing. Earlier this month, he told the US Senate that the NIH “has not ever and does not now fund gain-of-function research in the Wuhan Institute of Virology.” That appears to be only technically true, as the NIH grants actually go to a New York-based nonprofit EcoHealth Alliance – which then subcontracts some of its work to the WIV.