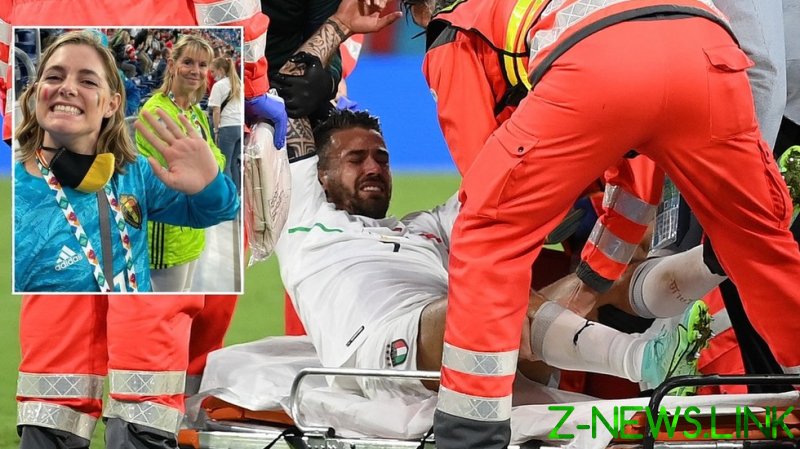 The incident occurred with 11 minutes remaining in the tense clash, which was dubbed by many the best game of the competition thus far.

One of the Azzurri’s key players in their surprising run to the last four under Roberto Mancini, Roma left-back Spinazzola had pulled up as he ran after the ball and was later stretchered off at the Allianz Arena in Munich.

Tested at the Sant’Andrea Hospital in Rome upon return to his homeland, after a teary farewell from his teammates, the 28-year-old was revealed to have suffered a subcutaneous rupture of his left Achilles tendon, which will rule him out for four months and the start of the Serie A season.

But not everyone present believed that his pain was genuine at first glance.

As he received medical treatment pitchside, Courtois’ sister Valerie used her brother’s official Instagram to take a video of the goings on and captioned it “That’s what we call tricks of the trade”, in a nod to Spinazzola possibly play-acting to run down the clock.

Now that it is has been confirmed the Italian has suffered a genuine knock, Valerie has been left with egg and her face and forced to apologize.

“I apologize for my reaction in the moment and I absolutely hope he has a good recovery.”

Yet that is not to say that the dark arts weren’t employed at all during the four-time World Cup winners’ heroic victory.

Widely-blasted for the furor and dubbed “pathetic” by England legend and BBC pundit Alan Shearer, Ciro Immobile was caught on the ground trying to claim a penalty but then miraculously recovering to celebrate with Nicolo Barella when the Inter Milan midfielder put their side 1-0 up on 31 minutes.