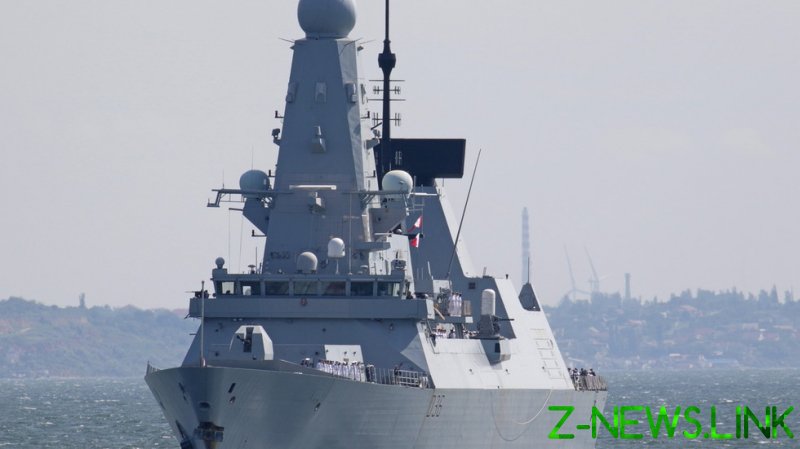 The state broadcaster’s defense correspondent, Jonathan Beale, also noted that the ship’s crew heard shots, but they were believed to be “out of range.”

In an audio report, Beale revealed that the ship purposely moved into the waters near Crimea, within 12 miles (19km) of the coast, through what the British called a “recognised international shipping lane.” The transit through Russian waters took over an hour, the correspondent said.

“[The Russian Coast Guard] have warned the ship not to go into Crimean territorial waters, claiming that they are Russian waters,” Beale said, noting that Britain does not recognise the peninsula as Russian, but Ukrainian.

“This would be a deliberate move to make a point to Russia,” Beale said.

According to the journalist, “increasingly hostile warnings were issued over the radio” by the coast guard, including one that said, “If you don’t change course, I’ll fire.”

As the HMS Defender left Russian waters, it was followed by two coast guard ships and around 20 planes, Beale said.

Earlier in the day, Russia’s Ministry of Defense claimed that the country’s navy fired warning shots at the at the British naval ship as it ignored warnings from the coast guard.

The British maneuver was later blasted by the defense ministry as a “blatant violation of the 1982 UN Convention on the Law of the Sea.”

Moscow’s view of the incident was soon contradicted by London, which instead claimed that “no warning shots have been fired at HMS Defender,” and the ship was simply “conducting innocent passage through Ukrainian territorial waters in accordance with international law.”

This would appear to directly contradict Beale’s statement that the Royal Navy opted to make a “deliberate move to make a point to Russia.”

“No shots were directed at HMS Defender and we do not recognise the claim that bombs were dropped in her path,” the British Ministry of Defence said, claiming that the Russians were “undertaking a gunnery exercise.”

Following the incident, the British ambassador to Russia was summoned to the foreign ministry in Moscow.

The HMS Defender is an air-defense destroyer, launched in 2009. Designed primarily for anti-aircraft and anti-missile warfare, it is currently conducting missions in the Black Sea. Before the recent incident, the ship was docked in the Ukrainian port of Odessa, where it played host to a signing ceremony, attended by British Minister for Defence Procurement Jeremy Quin and Deputy Defense Minister of Ukraine Alexander Mironyuk. London and Kiev agreed a deal for the UK to supply warships to Ukraine, with the British also pledging to help the country construct Black Sea naval bases.