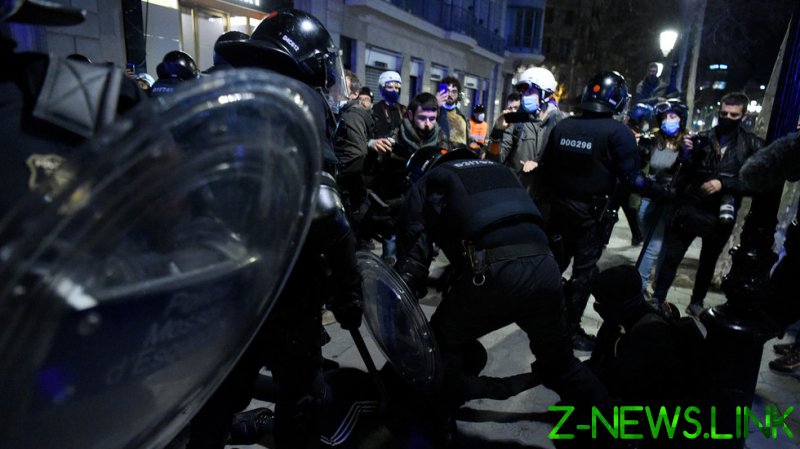 Protesters hurled projectiles and flares at police while setting fire to bins, which they then turned into flaming barricades. A fire was also started at the Barcelona stock exchange. Eyewitness video shared on social media purports to show some of the carnage.

The violence erupted in the wake of a court decision to send rapper Pablo Hasél to prison for nine months over song lyrics which insulted the king and allegedly glorified now-defunct terrorist groups.

At least 100 people have been arrested and a further 100 injured in clashes between protesters and police since, including one woman who lost an eye.

Police responded to people pelting them with bottles and stones by charging rioters with batons and dispersing them using non-lethal munitions.

Spain’s prime minister Pedro Sanchez has condemned the violence but his coalition partners in government, the Podemos party, have expressed support for the demonstrators.

Podemos leader Pablo Iglesias said that there was “no situation of full political and democratic normality” in Spain as his party filed a petition for a full pardon for Hasél and another rapper, Valtonyc who fled the country to avoid similar charges of “glorifying terrorism”.

The government announced it would change the so-called “gag law” which saw Hasel imprisoned, and would remove prison terms for offenses related to freedom of expression, though no timetable was given.