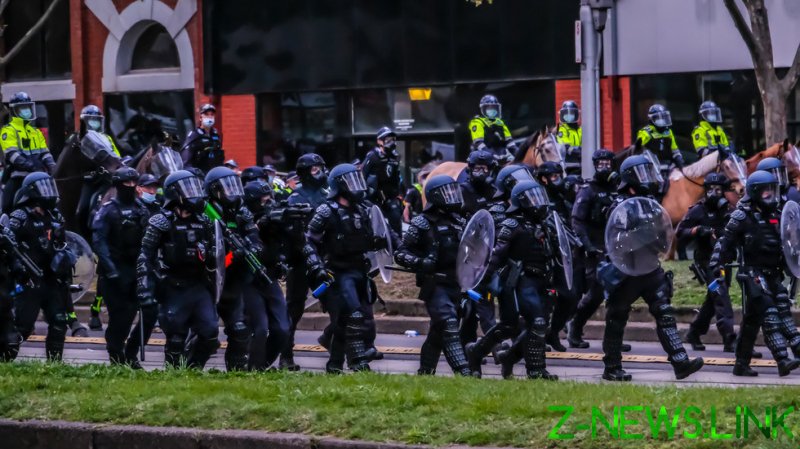 Police in Victoria initially issued a blanket order to keep local news helicopters out of the sky over the Melbourne city center known as the CBD, according to 7 News Melbourne, which reported that it was filing a legal challenge to the rule on Wednesday along with fellow Melbourne broadcaster Channel 9.

The Civil Aviation Safety Authority declared the airspace above Melbourne city center a ‘no-fly zone’ on Wednesday afternoon, encompassing three nautical miles from the district, before police relented after a wave of protest from the news media.

Calling the filming ban “an extraordinary new tactic from police,” the outlet explained the order was initially meant to keep news helicopters out of the sky until Monday but that “after complaints from media,” the police had partially rescinded the order. News outlets can still film the protests, the new rule says, but cannot broadcast the footage without an hour’s delay.

To justify the “unprecedented” ban on filming the massive, violent clashes between cops and protesters near the city center, police claimed protesters were watching footage from the news helicopters to get a clue as to where the cops were moving next. However, they presented no evidence to back up this claim, nor did they prove that protesters weren’t using more typical reconnaissance means, such as encrypted messaging apps or even phone calls, to track the movement of the authorities.

“A very important line has been crossed here. Victoria Police are censoring the broadcast media. This is the definition of police state behavior,” Director of Policy at the Institute of Public Affairs Gideon Rozier told Australian broadcaster ABC.

The violent response of Victoria’s police to protests against Melbourne’s brutal, lengthy lockdown – which has seen inhabitants of some public housing buildings literally trapped in their apartments with police patrolling the hallways – has caught the world’s attention. During a protest on Saturday, police knocked down and pepper-sprayed an elderly woman demonstrating peacefully with an Australian flag, and more recently reports have emerged that police are specifically targeting visibly credentialed news photographers with pepper spray and arrests.

Some 235 people were detained in the latest sweep of protests for breaching lockdown, according to the Daily Mail, which noted that during the weekend protests police also barricaded Melbourne city center and shut down public transit to try to keep people from assembling. Another 193 were fined. While Victorian Premier Dan Andrews (nicknamed ‘Dictator Dan’ by his unwilling subjects) has attempted to smear the entire anti-lockdown movement as unhinged, violent hooligans and enemies of public order, many in the crowd are average Australians whose livelihoods have been destroyed by the continuous economic shutdown that has gravely affected the country’s economy. The protests are only getting larger, as one video from Tuesday appears to show.

Footage of police firing rubber bullets into a protesting crowd was also posted to social media on Wednesday, shocking many of the demonstrators as one noted there were children present.