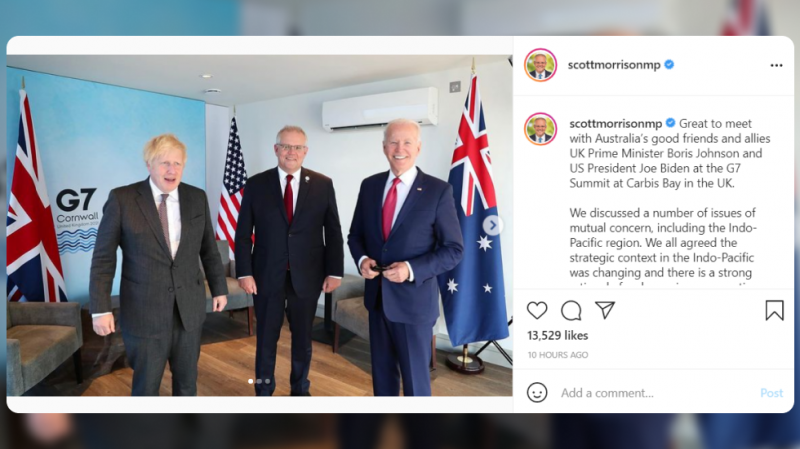 Morrison arrived as an invited guest at the G7 summit, which is being hosted by Britain at the seaside resort town of Carbis Bay. On Saturday, he was supposed to have his first bilateral meeting with Joe Biden since the latter’s election as US president. To the surprise of the press, the talks were also attended by the host of the summit, UK Prime Minister Boris Johnson, and were closed to the media.

The public was left to guess what was said during more than 40 minutes that the three-way discussion lasted. A short joint statement mentioned a discussion of “issues of mutual concern, including the Indo-Pacific region” and how “the strategic context” in the region warranted “deepening cooperation between the three governments.”

Morrison himself described the event as a “meeting of friends and allies, who share a view on the world,” but wouldn’t go into details when asked how many times China was brought up.

Earlier in April, the US president reportedly declined to listen to Morrison’s speech at a virtual climate change summit that the US had called. Unlike many other US allies, Australia defied Biden’s global agenda and would not commit to becoming carbon-neutral by 2050, with Morrison promising instead to achieve the goal “as soon as possible”.

John Hewson, the former leader of the Liberal Party, suggested that Morrison’s climate stance contributed to his reception at G7. The prime minister himself insisted that the issue was not “the subject of our discussions this afternoon”.

As public figures speculated whether the personal chemistry between Biden and Morrison was bad enough that it required Johnson to play chaperon, meme-smiths unleashed a torrent of jokes ridiculing the Australian prime minister’s treatment at the G7 summit.

Australia is not part of the G7 club, but was invited as a guest, alongside India, South Korea and South Africa. Before the meeting with Biden and Johnson, Morrison had a one-on-one with South Korean President Moon Jae-in.