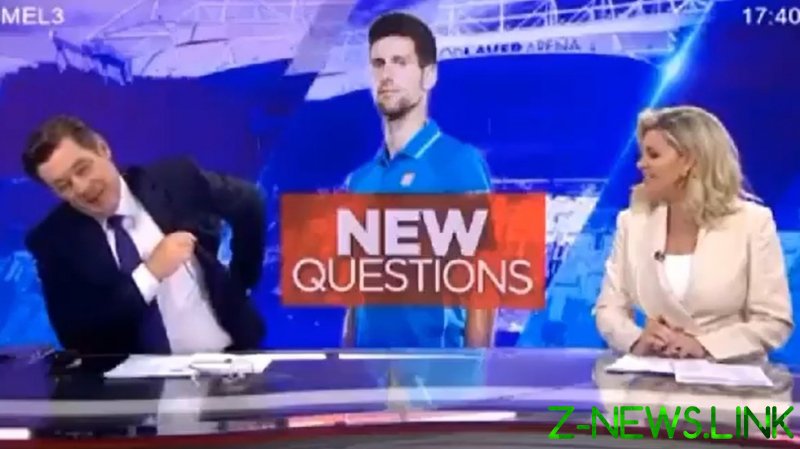 Australian TV anchors Mike Amor and Rebecca Maddern have been filmed attacking Serbian tennis star Novak Djokovic over his visa saga in hot-mic footage which soon spread across the internet.

World number one Djokovic was freed from detention and had his visa reinstated by a Melbourne court judge on Monday, but remains in limbo as the Australian immigration authorities consider whether to cancel his visa for a second time and deport him.

The case – which centers on the unvaccinated Djokovic’s right to be in the country with a medical exemption – took a new twist when it emerged the Serbian star had filed incorrect information on his entry declaration about his travel movements in the 14 days prior to his arrival in Australia.

Djokovic, 34, addressed the issue in an Instagram post on Wednesday, apologizing for the error and also admitted that he had attended an interview in Serbia after discovering he was positive for Covid-19 back in December.

Discussing the saga, Channel 7 broadcasters Amor and Maddern appeared to believe they had wrapped up filming before launching an X-rated attack on Djokovic.

“Whatever way you look at it, Djokovic is a lying, sneaky a**hole,” Maddern is heard telling her colleague.

“It’s unfortunate that everyone else around stuffed up. But to go out when you know you’re Covid positive – well, I don’t think he was even Covid positive.”

Amor then chimes in: “You’ve got a bulls**t excuse and then he fell over his own lies, which is what happens.”

“And then ticking that he didn’t go to Spain, it’s just like…,” adds Maddern, referring to the incorrect information on Djokovic’s travel declaration.

“Well, I think he’s going to get away with it…,” Amor says before taking aim at the authorities for their role in the debacle.

“I think most fair-minded people would say the bloke’s an a**hole, but did they do the right thing by him, I don’t know. They f**ked it up. That’s the problem, isn’t it?”

Maddern adds: “I don’t think anything was gained by putting him in immigration.”

Amor brings up the case of Czech player Renata Voracova, who was deported from Australia after it was discovered she had been allowed into the country with the same type of medical exemption as Djokovic.

“But that poor Czech girl that was sent home, hunted down and sent home…,” Amor says before the footage cuts out.

The clip spread like wildfire online, prompting some to ponder whether it was actually a publicity stunt by broadcasters.

However, bosses at Seven Network have said they are investigating who is behind the leak.

“The illegal recording was of a private conversation between two colleagues,” said director of news and public affairs Craig McPherson.

“It was an underhanded, cowardly act in breach of the Victorian Listening Devices legislation the perpetrator of which will be accordingly dealt with when found.”

The network’s managing director added that Maddern had apologized for the remarks, also calling the incident “illegal.”

Maddern, 44, only joined the show in the past two weeks after switching from Channel 9 to partner Amor as a newsreader.

But some have claimed the broadcasting pair could even stand to benefit from the row, considering the anger among some Australians over Djokovic’s participation at the season-opening Grand Slam in Melbourne next week, where he will be aiming to win a record 21st Grand Slam title.

“At the end of the day, this was never meant to be broadcast, and Mike and Rebecca are seen as a big part of Seven Melbourne’s future, so I think they’ll ride this out,” said veteran Australian TV producer Rob McKnight.