Home / WORLD / Aussie police ‘SATISFIED’ with arrest of pregnant woman over anti-lockdown message. She described it as scary kidnapping

Aussie police ‘SATISFIED’ with arrest of pregnant woman over anti-lockdown message. She described it as scary kidnapping 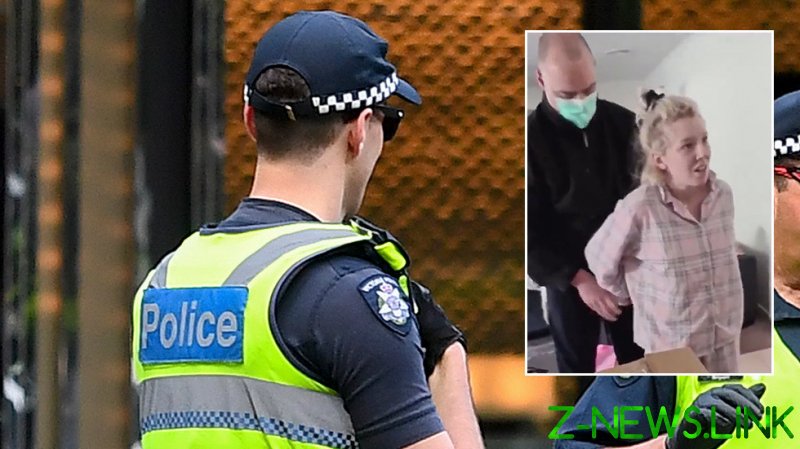 A video of police putting Zoe-Lee Buhler in handcuffs went viral earlier on Wednesday, with numerous Australians lashing out at the police’s conduct and the reason for the arrest. Authorities of Australia’s Victoria state charged the 28-year-old pregnant woman with “incitement” of a protest against the strict coronavirus lockdown in the area.

Those online were particularly enraged by the fact the arrest happened in front of Buhler’s children and inside her own home. Officers appeared to have ignored the woman’s pleas to let her go to a scheduled ultrasound scanning and the very fact of her pregnancy.

Victoria state police responded to the mounting outrage on Thursday, with Assistant Commissioner Luke Cornelius confirming he has seen the viral footage. According to him, the police team “have conducted themselves entirely reasonably, they’ve been polite, professional.”

“We’re absolutely satisfied the members behaved appropriately and in accordance with our policy,” Cornelius stated, referring to “briefings provided to me.”

He admitted, however, that the optics weren’t so great. “I would be the first to acknowledge the optics, for want of a better description, arresting a pregnant female, it’s never going to look good,” he said.

Meanwhile, Buhler herself – who officially faced “incitement” charges later on Wednesday – recalled the experience. “Honestly, I was scared I was being kidnapped by people because they weren’t in uniforms,” she told reporters.

Expanding on her Facebook message, Buhler said she didn’t realize calling for the anti-quarantine gathering was an offense, adding she was ready to cooperate with police. “If the police had just called me and told me to remove the post I would’ve done so,” she said.

Victoria has been in lockdown since July to curb the Covid-19 outbreak. State authorities imposed stay-at-home quarantine rules and a nighttime curfew in the state capital, Melbourne. The quarantine saw businesses closed and public events banned across the state, with police applying a hardline approach to enforcing it.