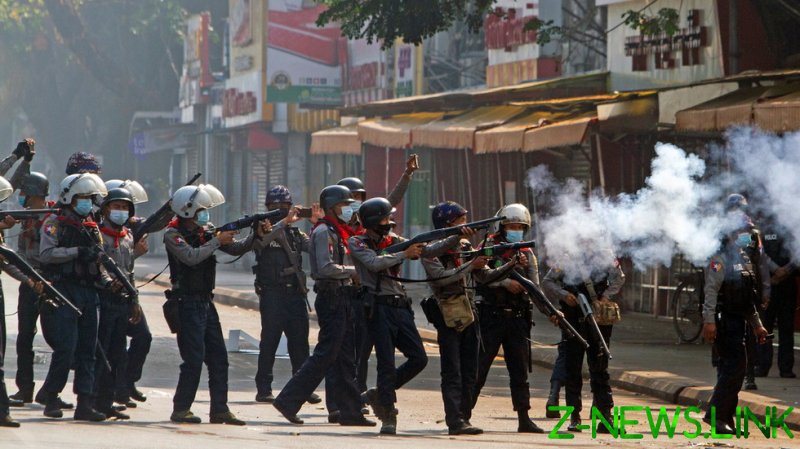 Law enforcers shot at protesters in Myanmar’s largest city of Yangon on Sunday, according to local media reports backed up by multiple videos circulating online. One man was brought to a hospital after the shootings, where he succumbed to a bullet wound to his chest, an unnamed doctor told Reuters.

Footage from the scene shows police aiming and firing various weaponry at protesters, as well as hurling stun grenades at them.

Multiple shootings were also reported in the southern town of Dawei, where at least one person was killed and several were injured, local politician Kyaw Min Htike told Reuters.

The unrest across Myanmar continues after the country’s military seized power and detained elected government leader Aung San Suu Kyi, as well as many top members of her party, on February 1. The military alleges that the politician’s comfortable win in November’s election was fraudulent. The coup prompted mass protests across the country, with thousands demanding the release of detained politicians and a return to democratic rule.

The move by the military ended a nine-year period of civilian rule in the country. The military previously controlled Myanmar for decades from early 1960s until 2011. The army has imposed a state of emergency that it says will remain in place for one year.