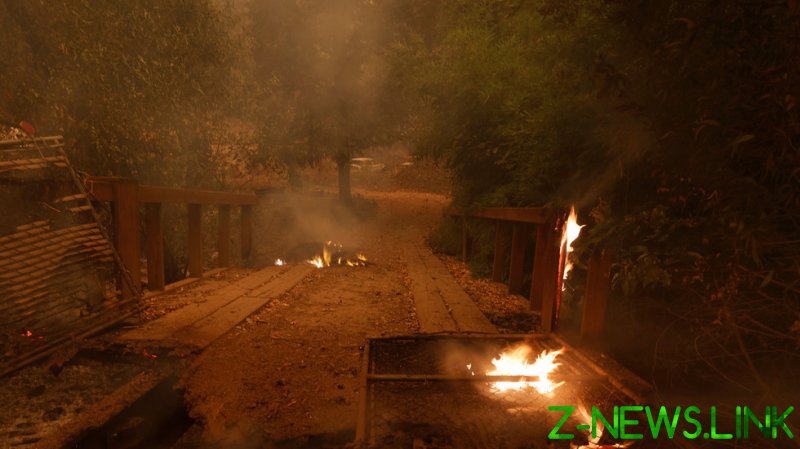 Two of the deceased victims were discovered in one location, while the third was found separately, Butte County Sheriff Kory Honea said, noting they had not yet been identified.

Out of 85 missing persons reports filed in relation to the fire, 12 have not yet been located, he added. Several others were severely wounded after being trapped overnight in the inferno, dubbed the ‘Bear Fire,’ according to CalFire Battalion Chief Sean Norman.

“We were rescuing people most of the night. We had several critical burn injuries of civilians we were able to rescue and bring into the fire station and then get them off the hill,” the fire chief said.

“Hundreds” of homes and other structures have been damaged or destroyed by the conflagration, which is part of the ‘North Complex’ fire ignited by lightning in August, fire officials told reporters on Wednesday evening. It recently reignited near Butte County during high winds, putting thousands of other buildings at risk as the fire continues to sweep the area.

Evacuation orders have been issued for Butte, Plumas and Yuba counties, while a number of evacuation centers were established for thousands of residents fleeing the blaze.

Eerie photos and videos have circulated on social media, showing the skies over California glowing a deep orange, which also enveloped the Golden Gate Bridge.

A colossal plume of smoke was seen over the fire from the air, while some on the ground shared footage of ashes “raining” from the clouds.

The three additional fatalities bring the death toll in California’s wildfires to at least 11 in 2020 alone, according to Reuters, as a number of states in the Pacific Northwest battle their own significant fires. Some 35 separate blazes continue to burn in Oregon, which Governor Kate Brown called “unprecedented” and “devastating” earlier on Wednesday, while Washington Governor Jay Inslee has declared a statewide emergency over ongoing “catastrophic” fires.