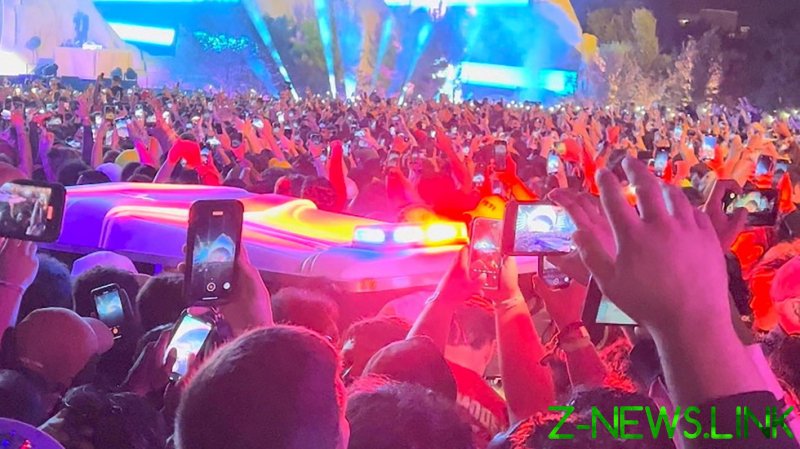 At a Saturday press conference, Houston Police Chief Troy Finner suggested the Friday night’s events were even more chaotic than originally thought, with the police official saying at least one security guard reported being “pricked” in the neck with something, possibly a needle while he was trying to restrain another person at the Travis Scott concert.

The security guard passed out after feeling the stab in his neck and medical personnel later used Narcan to revive him, which is typically used to help in overdoses and reverse the effects of fentanyl poisoning.

“They administered Narcan and he was revived and the medical staff did notice a prick that was similar to a prick that you would get if somebody tried to inject,” Finner said. There could also be others who were injected, he said.

The police chief said the investigation remains ongoing. Some 25 people have been arrested, the majority of them for trespassing. One person was arrested over having marijuana on them, and another was nabbed over public intoxication. Police said they would be reviewing actual footage from the night taken by Live Nation. There were over 1000 people providing security at the festival between police officers and private security.

The eight people who died in the chaos, some of which was captured in shocking videos and images on Friday night, were between the ages of 14 and and 27, police revealed. Among the eight, two were minors. Some 300 people have been treated for injuries from the Travis Scott concert.

Houston police Executive Assistant Chief Lt. Larry Satterwhite reported that the tragedy unfolded “over the course of a few minutes,” and that several people appeared to have simultaneously suffered “some type of cardiac arrest or some type of medical episode.”

Fallout from the concert has caused major outrage, with critics increasingly pointing to rapper Scott and the concert’s organizers as at least partly responsible for the massive crowd and the concert continuing while people were injured – though Scott did eventually end his set.

One video spread quickly on social media on Saturday, showing a woman at the concert explaining to a camera operator that the show must be stopped as someone is “dead.” The camera operator appears to ignore the woman as he continues taping the show.

Scott released a statement on Saturday responding to the deaths and numerous injuries from the concert, claiming he is “devastated” by what happened.