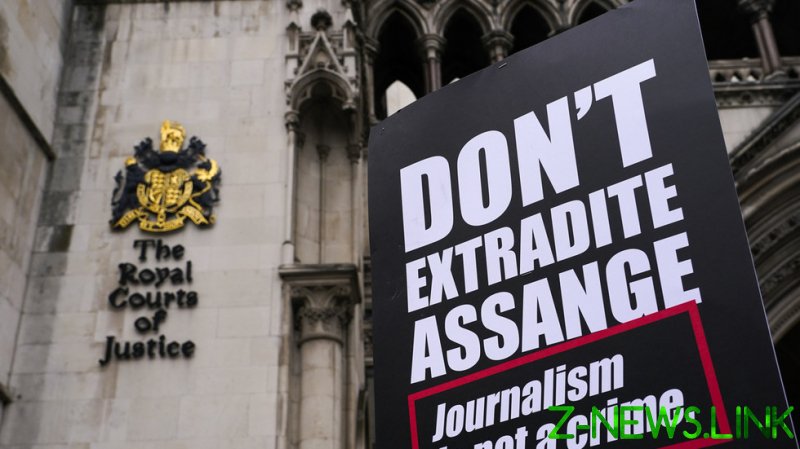 The IFJ, which represents journalists’ unions worldwide, condemned his persecution by the UK and US governments, as well as the recently revealed “credible accounts of plans” by the CIA to assassinate or kidnap him.

“This week, the US will try to extradite Julian Assange, threatening him with a 175-year sentence. All major human rights and free-speech organisations oppose his extradition. Journalism is not a crime,” the IFJ declared over a full-page image of Assange.

It warned that press freedom is “suffering lasting damage” by his continued persecution.

“Representing more than 600,000 journalists worldwide we call for his immediate release and condemn recent revelations of a CIA plot to assassinate or kidnap him,” the ad concluded.

During the US court appeal on Wednesday, it was reported that Assange was not feeling well enough to attend in a virtual capacity. However, he did eventually appear via video link, and was described by journalist Tareq Haddad as “coughing and wincing in pain.”

US lawyers are attempting to make the case that Assange would not be put at greater health risk if he were extradited on charges of violating the US Espionage Act, after UK Judge Vanessa Baraitser ruled in January that he could not be extradited over fears that he would be at risk of suicide in the US prison system.

Assange’s defence has argued that he would be kept in harsh and inhumane conditions in a US prison and that the risk would be too great. Assange has been held at London’s maximum security Belmarsh Prison since 2019, with his physical and mental health declining.

Lawyers assured the court on Wednesday that the US would “consent to Mr. Assange being transferred to Australia to serve any custodial sentence imposed on him.”

Supporters of Assange and press freedom protested outside the court on Wednesday and called for his release.

It was reported last month that the CIA, under Trump-appointed director Mike Pompeo, had plotted to kidnap or assassinate Assange as he took refuge in the Ecuadorian Embassy in London. A Yahoo News report even indicated that the US intelligence agency was willing to engage in violent street combat in England’s capital city to achieve its goals.