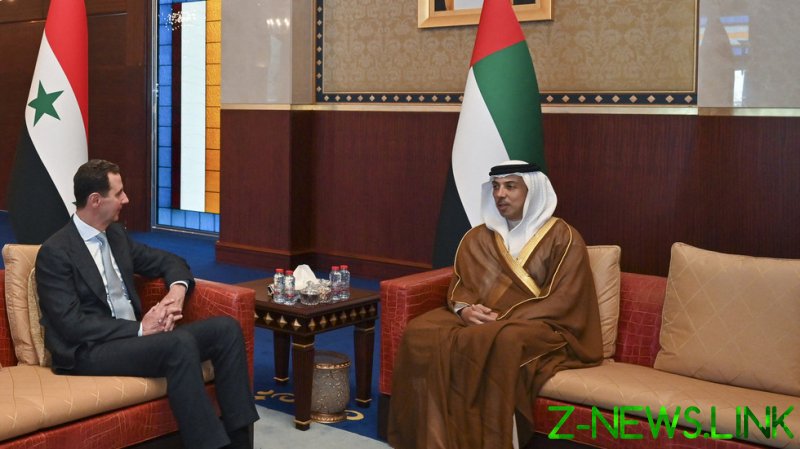 Syrian President Bashar al-Assad has stepped up an effort to thaw relations with Arab nations that opposed him during a war that devastated his country for 11 years, traveling to the United Arab Emirates for talks on improving ties with the oil-rich state.

Assad met with Crown Prince Mohammed bin Zayed in Abu Dhabi and with Crown Prince Mohamed bin Rashid Al Maktoum in Dubai on Friday, marking his first visit to another Arab nation since the fighting in Syria began in 2011. The leaders discussed expanding bilateral cooperation – particularly in terms of investment and economic relations – to promote the “aspirations of the two brotherly peoples,” Assad’s administration said.

Bin Zayed reportedly confirmed the UAE’s support for Syria’s territorial integrity and affirmed the need for the withdrawal of “all foreign forces which exist illegitimately on the Syrian lands.” Assad said that given increasing instability around the world, “we must continue with adherence to our principles, the sovereignty of our countries and the interests of our peoples.”

President Joe Biden’s administration reacted to the talks by saying it was “profoundly disappointed and troubled by this apparent attempt to legitimize” Assad. “We urge states considering engagement with the Assad regime to weigh carefully the horrific atrocities visited by the regime on the Syrians over the last decade, as well as the regime’s continuing efforts to deny much of the country access to humanitarian aid and security,” State Department spokesman Ned Price said.

Washington backed rebel fighters, including Islamists traveling to Syria from other countries, in an effort to force regime change in Damascus. Assad also faced opposition closer to home. Syria was expelled from the Arab League after the civil war broke out, and some of its neighbors, including Saudi Arabia and Turkey, supported the opposition fighters.

Assad has gained the upper hand in the war, largely because of help from allies Russia and Iran, but parts of his country are still in ruins while some of the oil-rich regions remain under US-backed rebels’ control. Upward of 500,000 people have been killed, and millions fled Syria as refugees.