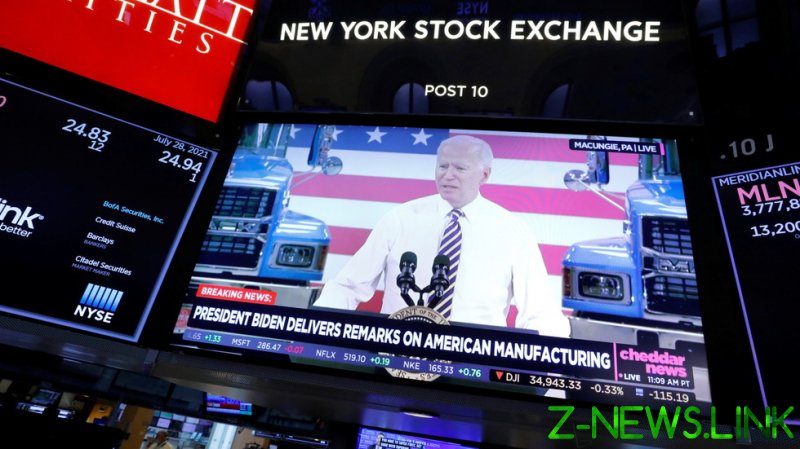 Recent figures showed that the consumer price index (CPI) rose 5.4% over the last year, the fastest since right before the 2008 financial crash. A Morning Consult-Politico poll released on Wednesday has a combined 59 percent of registered voters saying Biden’s policies were either “very responsible” or “somewhat responsible” for inflation, and only 28 percent combined believing the current administration was “not too responsible” or “not responsible at all.”

Republicans overwhelmingly (82%) blamed the inflation on Biden. Democrats were more inclined to think it was caused by a return to pre-pandemic behavior by their fellow Americans, in line with the White House’s official position.

The Biden administration has brushed off concerns about inflation by saying it was “transitory.” On Wednesday, however, Federal Reserve Chairman Jerome Powell said the Fed would continue its current monetary policy until the unemployment rate improves, adding that inflation “will likely remain elevated in coming months before moderating.”

Powell blamed “supply bottlenecks” in some sectors that were “larger than anticipated.”

There is still “some ground to cover” before the US central bank would consider raising interest rates, Powell said, arguing that the labor market has not yet fully recovered due to federal unemployment benefits, worker preferences, and ongoing concerns about Covid-19. Federal agencies have started introducing vaccination mandates and reimposing masking, citing reports of the rise in Delta variant cases.

None of this is stopping the administration from pushing ahead with its ambitious plan to invest over a trillion dollars into “infrastructure” – defined far more extensively than the traditional roads and bridges. The White House announced that a tentative deal has been struck on a bipartisan proposal. The Senate voted to begin debate on the proposal on Wednesday evening, after Republicans agreed not to filibuster it.

The plan is apparently the one hammered out back in June by a group of ‘moderates’ on both sides of the aisle. However, it ran into trouble right away, as Biden told reporters at the White House he only intended to sign it into law if accompanied by a much bigger proposal, which the Democrats sought to ram through using reconciliation, a simple-majority procedure intended to bypass the GOP opposition.

After weeks of back and forth, the senators appear to have figured out how to pay for the compromise, but Senator Kirsten Sinema (D-Arizona) is reportedly opposed to the $3.5 trillion ‘reconciliation’ bill. The clock is now ticking for some kind of bill to pass before Congress leaves town for August recess.