Home / WORLD / As Manchester City and Juventus negotiate, what is really behind the Premier League giants’ swoop for Cristiano Ronaldo?

As Manchester City and Juventus negotiate, what is really behind the Premier League giants’ swoop for Cristiano Ronaldo? 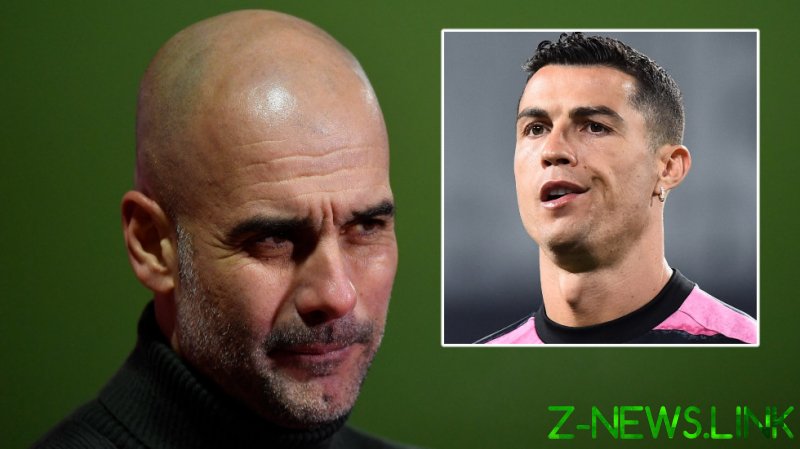 As if the drama of Lionel Messi’s Barcelona contract talks breaking down, ending a 21-year relationship with the Catalans, and then joining PSG wasn’t exhausting enough, one of the most chaotic transfer windows of modern times has more in store.

Real Madrid, whose rogue president Florentino Perez claimed they were broke and needed the Superleague to stay afloat, have already tabled a €160 million ($188 million) bid for Kylian Mbappe which has been rejected by the Parisians.

And while at face value that doesn’t seem so bad given how much the Qatari-owed outfit inflated the market with their €222 million ($216 million) capture of Neymar from Barca in 2017, the fact the youngster has less than a year remaining on his contract and Madrid may be prepared to go even higher highlights how much of ludicrous farce modern football has become.

The negotiations between Manchester City and Juventus for Cristiano Ronaldo’s transfer are another late shock with six days to spare until closing time on August 31, but at least there is more sense involved in those.

Like Mbappe, the veteran has under a year to run on his deal signed after leaving the Bernabeu in 2018.

The latest from transfer expert Fabrizio Romano is that the Italians want a €28-30 million ($32.9-$35 million) fee for Ronaldo “as they won’t sell him on a free”, with Mendes talking directly with City and bartering on personal terms which are usually a similar price per annum but may be halved.

Yet again, though, it must be asked what the real motivation is behind the potential move.

Is this merely throwing down the gauntlet and continuing the arms race between Abu Dhabi and Qatari?

Not to be outdone by PSG overlords Qatar Sports Investments, Sheikh Mansour bin Zayed al-Nahyan appears to be drawing his line in the sand in a contest between two super-rich states whose pet sporting projects are about to face off in the Champions League group stage.

Do City even need him?

After being humiliated by their failure to lure England striker Harry Kane, who would cost an amount approaching double the £100 million ($139 million) they paid for Jack Grealish at 28, is the swoop for the 36-year-old an attempt to save face?

Separately, coach Pep Guardiola has expressed his happiness with Gabriel Jesus, a Swiss army knife of a forward capable of playing anywhere down the front line who Guardiola claims is a “proper striker” despite his successes on the wing earlier this season.

The Brazil international runs the length and breadth of the pitch like a madman for 90 minutes, just as Sergio Aguero had to learn to do in order to survive the cull when Guardiola rocked up from Bayern Munich in 2016, and it remains to be seen if Ronaldo, in the late stage of his career, would fit that system and be capable of pressing as the coach demands his frontmen do.

What is also curious is the prospect that Guardiola would even want a figure who was one of his sworn enemies when wearing the Blancos shirt during his tenure managing Barca in the tiki-taka era.

There are echoes of Chelsea’s capture of Andriy Shevchenko in 2006 under owner Roman Abramovich, which was against the wishes of Guardiola’s one-time arch rival, Jose Mourinho: maybe the powers that be at the City of Manchester Stadium simply don’t care.

After all, at a business event yesterday, the 50-year-old pretty much announced that he will step away from the City hot seat in 2023, when his current arrangement terminates, to possibly manage a national team.

Even if Ronaldo’s potential arrival would unbalance the harmony of his current squad, maybe City’s leaders in Abu Dhabi are willing to risk their relationship with the manager becoming frayed towards the end – as most do in football and life itself.

As for Ronaldo himself, why is he risking his legacy with cross-city rivals United by entertaining such a venture?

It is sometimes easy to forget there was life before the Bernabeu for the Portuguese, but it was at Old Trafford that he made his bones, won his first Ballon d’Or and lifted his maiden Champions League title.

As some have pointed out, Ronaldo has always been about “personal accolades” and “big team trophies”.

“The idea Ronaldo has this misty-eyed, romantic relationship with United is so wide of the mark,” added an ESPN editor.

“They were a means to an end for him. It’s ludicrous to think he’d reject MCFC because of his past.”

“But his dream was Real Madrid and he fulfilled that. And he won’t care one bit that moving to City would cheapen his memory among most United fans. He just wants to win.”

Branding himself a “slave” in north-west England when the Red Devils refused him the chance to head to La Liga summer after summer in the late 2000s, Ronaldo is just chasing the last big nights he has to enjoy before Father Time finally catches up with him. He couldn’t care less about rivalries other than the one he has with Messi to rewrite the history books.

If it was Barcelona making an approach for him, he’d just as gladly consider that too.

Maybe he and City deserve one another in what will be among the game’s all-time vanity projects.