As India weeps for its dead, the supercilious Left goes into Modi Derangement Syndrome overdrive to score political points 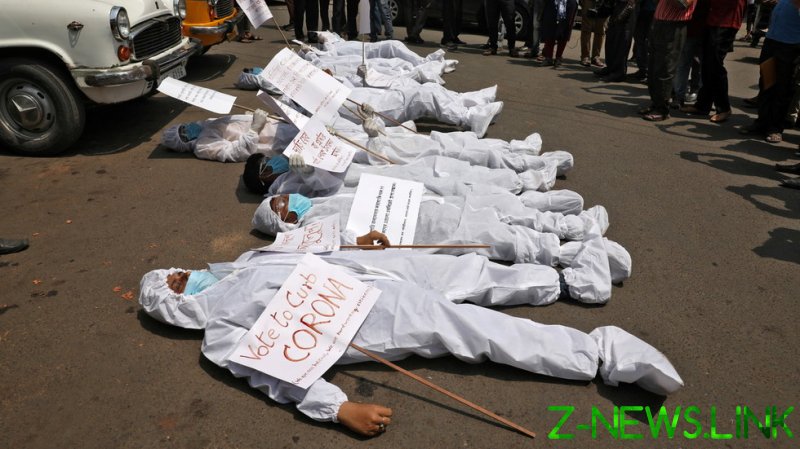 The world is now well aware of the pain and misery that engulfs India as it continues to grapple with the Covid-19 pandemic. It is not a good time for the country, where death tolls keep rising and loved ones are lost well before their time.

India broke another record this weekend with over 400,000 new cases in a single day and the daily death toll doubling over the course of the period between April 19 and April 29. There is also the risk of undercounting deaths – so the final count remains unknown.

After an obstinate and sluggish start, America is finally helping. The White House said the US would share with other countries as many as 60 million doses of the AstraZeneca Covid-19 vaccine once it receives federal approval in the coming months. India, reportedly, expects to get the largest chunk of the vaccine doses.

Other countries like the UK, Pakistan and China have stepped up to the plate too, helping with funds and rapid testing kits, medicines, masks, PPE kits, ventilators and so on.

Yet underlying this drive, there is an overriding sense of schadenfreude permeating the reportage over a country that left-wing chattering classes like to condemn as the world’s ‘largest dictatorship’ courtesy of an apparently ‘fascistic’ overhead and ‘supremacist’ political apparatus. This has come predominantly through Western coverage. These are the optics of death and devastation, hazmat suits, burning funeral pyres, the gnashing of teeth, untroubled corpses left splayed in the stench-filled rotting diseased streets.

Rather than honour the sanctity of ancient Indian burial traditions, and allow families to grieve, vulture-like press agencies and supercilious Modi-hating news outlets are hovering over the dead and sending their best snaps across the world; uploading them for purchase through photo banks for prices that dwarf the cost of burying the dead.

Imagine if the holy moments of your loved one leaving this mortal world are photographed for the world to see, this ghoulish spectacle set against the misery, the mayhem and the constant spectre of death? Overriding this catarrhal reporting are two fundamental narratives – to teach a lesson to the world about resisting vaccinations and the merits of being spartan about individual liberties, and secondly to characterise Narendra Modi as the villain of the piece, to give the ‘Indian Trump’ a political flaying.

What we see now is not Trump Derangement Syndrome, but Modi Derangement Syndrome. Column inches have been devoted to eviscerating Modi and the governing BJP as if ‘populism’, ‘Indian nationalism’, ‘Hindu fascism’ have all somehow contributed to the depletion of oxygen tanks around the country and led directly to the number of deaths. This is a disturbing narrative that supplants concern for the dead and dying in order to win political points against a nemesis that the left-wing media has long wanted to take down.

The Indian Left long ago embraced authoritarianism and is increasingly intolerant of any point of view other than its own, and that view is that Modi is Trump with a Nehru jacket, a white beard, and a fascination with a bygone age of supremacist ideology. The left-wing media – across the world but particularly prevalent in India, the UK and the US – conflate issues and include multiple narratives that have no bearing on the situation being analysed.

As Indians continue to count the dead, scientists are puzzled about the ferocity of the second wave of the pandemic but it seems the critics have decided for themselves that liberty and Modi’s supremacist framework are responsible for it. The reality goes much deeper; this is more to do with the fact that despite India’s incredible growth in defence, its economy, its service-based economy, and agrarian production, it has fundamental challenges with regards to bureaucracy, disbursement of monies, allocation of funds to critical projects; and it is years and years of autocratic rule by the Congress Party that led to wastage of foreign aid on defence and space projects instead of alleviating homelessness, increasing sanitation, and embedding projects around indoor plumbing, education and particularly the medical and health sectors.

At the time of writing the Indian Left stands by idly while Modi’s representatives in West Bengal are attacked, maimed, and in some cases murdered as elections unfold. This abandonment of liberty, and browbeating of a political viewpoint that the Left doesn’t agree with, won’t make headline news, but pointing the finger at Modi – like Trump before him – as the architect of death has become the prevailing orthodoxy as the Left continues to tell Indians what to feel, think, and how to grieve.