As Germans flirt with idea of first Green Chancellor, a key opposition figure warns of the party’s ‘cultural Marxist’ agenda 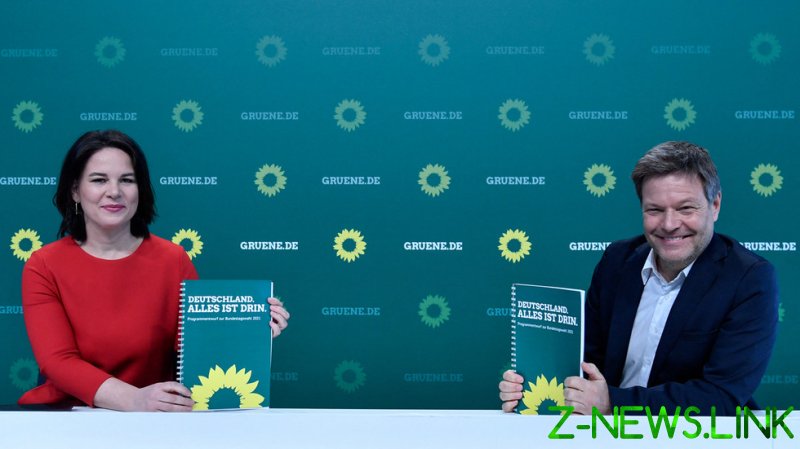 Spring has arrived with a burst of new growth for the German Greens, giving rise to the biggest potential upset in Germany’s politics since the war – the election of the nation’s first Green Chancellor.

One poll has the ruling Christian Democrats and Christian Socialist alliance just two points ahead of the Greens, but not everyone is blown away with the idea. Leading German opposition figure Gunnar Beck says he’s “very concerned” at the surge in Green votes with the federal elections less than six months away.

Because the Greens are not about vegetarianism and driving electric cars in Germany, they promote an ideology steeped in the radical left and that, he says, is worrying.

Speaking exclusively with RT.com, the Alternative für Deutschland Euro MP warned, “The Green Party is not about ecologism.

“It is now a cultural Marxist, internationalist party so they would press for a much more centralised EU state, fiscal union, ever-more money printing by the European Central Bank, solidarity in more policy areas, the green transition… in short everything that is subsumed beneath the term ‘The Great Reset’.

“The trouble is that many of the ideas coming from the Greens have never been tried and young voters have a great deal of misplaced confidence in them. They don’t know about the cost and the cultural and economic consequences of Green policies, so there will be widespread disenchantment after a few years of this radical cultural Marxism.

“In terms of migration, for instance, the Greens have made no secret of the fact that they would like to see Germany transformed beyond all recognition and I think we could see much more immigration than even the very high levels we’ve seen under Angela Merkel.”

While Merkel’s government has been rocked by a series of recent scandals involving top politicians profiteering from government contracts for protective equipment during the Covid-19 pandemic, the CDU/CSU partnership has lost its shine for many, but Beck believes it’s not game over… yet.

He suggests the current favourite for the top job, CDU boss Armin Laschet, will be replaced by popular CSU leader Markus Söder as the Union’s candidate, giving a much-needed boost to the alliance.

“It’s quite possible that they will choose a new candidate in Söder to run for Chancellor, instead of Laschet and this should help revive the fortunes of the CDU-CSU somewhat,” Beck says. “The alliance will come through the election but quite probably with fewer seats, whereas the Greens should improve on their last result quite significantly. The most likely outcome is a new coalition of the CDU/CSU with the Greens, in which case the Greens would be very influential in a lot of key cabinet posts.

“So irrespective of whether they get the largest share of the votes or come in a close second I think the Greens would have a profound effect on German policy in every respect. I think broadly they will continue Merkel’s policies but at a much faster pace.”

For Beck, the outlook is grim.

“Sadly, a lot of damage could be done on the way to bringing home to people what Green policies actually entail in terms of rising inequality and reduced living standards.

“And that is something we should all be concerned about.”