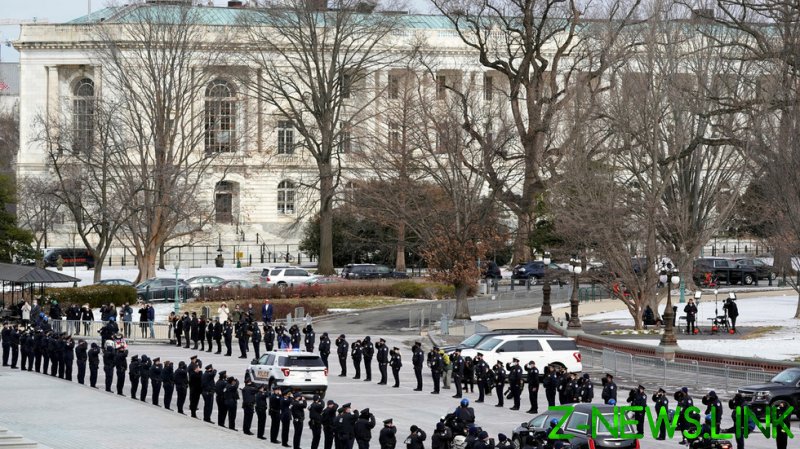 The medical examiner’s report on Officer Brian Sicknick’s death following the January 6 riot hasn’t been completed, as toxicology results are still pending, the Capitol Police Department said Friday in a statement. More than 50 days after the Capitol attack – and even as other aspects of the “insurrection” investigation race ahead – the department offered no explanation for delays in determining what substances may have been in Sicknick’s bloodstream.

“Officer Sicknick’s family has asked for privacy during this difficult time and that the spreading of misinformation stop regarding the cause of his death,” the department said.

Police gave no indication of the types of misinformation they were citing. However, CNN and other mainstream media outlets have falsely reported that Sicknick was bludgeoned to death with a fire extinguisher. It took until nearly four weeks after the riot for CNN to say – without correcting any of its previous coverage – that medical examiners found no sign of blunt force trauma. It turned out that Sicknick collapsed in his division office hours after the riot ended, reportedly from a stroke, and died in a hospital the following night.

Investigators reportedly suspect that Sicknick died as a result of a reaction to chemicals, such as bear spray or pepper spray, to which he was exposed during the riot. The New York Times, CNN and other media outlets on Friday focused their reporting on the fact that the FBI has zeroed in on an unidentified suspect in the killing of Sicknick.

However, it is just as likely that the outlets, which apparently used Sicknick’s death as part of their narrative, are jumping ahead of themselves again: without knowing the cause of death, it’s unclear how one could prove that a particular person or persons killed the officer – or that he was “killed” at all. CNN’s story also is still claiming that the officer “suffered his fatal injuries” during the riot, although Sicknick wasn’t initially hospitalized unlike some 15 other Capitol police officers injured that day. Ken Sicknick, the officer’s brother, revealed that Brian sent him a message indicating that despite being pepper-sprayed twice, he was not in bad shape.

In contrast to the lack of new information on the cause of Sicknick’s death, the FBI is bragging about rapid progress on the overall Capitol investigation. “The investigation into those responsible is moving at a speed and scale that is unprecedented, and rightly so,” acting Deputy Attorney General John Carlin said Friday. “Those responsible must be held to account, and they will be.” He added that as of Thursday night, more than 300 people had been arrested in connection with the Capitol attack.

Carlin – a former ABC News contributor and a key figure in the Obama-Biden administration’s secret surveillance of Donald Trump campaign aide Carter Page – has painted a picture of Washington under siege from Trump-inspired terrorists. Speaking of his return to the Department of Justice four years after resigning, he said, “I never expected to have to walk through the Department of Justice hallways filled with hundreds of soldiers positioned to protect the department from terrorists, but I did… That is not acceptable. That is not America, and it will not happen again.”

But continuing delays in determining the cause of Sicknick’s death are raising more and more questions over a key piece of the narrative used to justify fears that millions of violent, cop-killing insurrectionists seek to topple the government.

“The problem is, the Dems have used this as a major weapon,” one commenter said Saturday on Twitter. “Truth needs to come out ASAP.” Another observer agreed, arguing that if Sicknick died of natural causes, revealing the truth would “blow up” the insurrection narrative.

Conservative commentator Peter McConeghy pointed out that Sicknick’s autopsy report is just one of several unanswered questions that are being brushed off. For instance, police still haven’t identified the officer who shot and killed rioter Ashli Babbitt inside the Capitol. Nor have investigators determined who allegedly planted bombs at the Republican and Democratic party headquarters offices the night before the riot.

A total of five people died on the day of the Capitol riot, including Sicknick, Babbitt and three more pro-Trump protesters who are said to have died of medical conditions, such as a heart attack. Two more Capitol police officers have committed suicide in wake of the events, with media quickly linking the tragedies to the riot, but their deaths have not been surrounded by the same hero veneer nationally, and there appear to be no investigations launched in connection with the suicides.