As column in Moscow’s top progressive newspaper labels West ‘New ethical Reich,’ are Russian liberals turning away from EU & US? 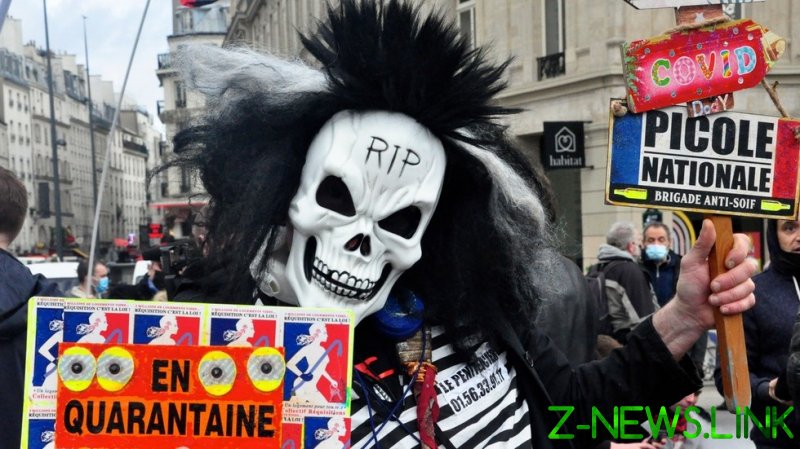 “The Russian liberal is a thoughtless fly buzzing in the ray of the sun; that sun is the sun of the West.” So said the nineteenth century Russian philosopher Pyotr Chaadayev. If the basic position of the Russian conservative is that Russia is different from the West and should follow its own distinct path of development, that of the Russian liberal is that the same rules of historical development apply to all nations, and that more backward countries, such as Russia, in their view, are therefore bound to follow the same path as more advanced ones – i.e. the West.

It’s a short step from this to a belief that the West is good and Russia is bad. An example of this sort of thinking appeared last month in the online newspaper Republic.ru in the form of an article by Dmitry Gubin, a Russian journalist living in Germany who has a regular show on the liberal radio station Ekho Moskvy.

“I’m not a patriot. I don’t love Russia. … I don’t love the Russian people, and I don’t consider it great. For the simple reason that there is no Russian people, at least not in the way that the people exists in the West. … If the main instrument of survival for Western peoples is fighting for their rights, then for the Russian people it is conformism, opportunism and double-think. … The greatest achievements of Russian culture happened only when it was open to the West and learnt from the West.”

Gubin’s position is a bit extreme, but not untypical. For the Russian liberal, the West is everything that Russia should be, but unfortunately is not. All of which makes a new manifesto published in the liberal newspaper Novaya Gazeta all the more explosive.

Written by theatre director Konstantin Bogomolov (also known as the husband of socialite and one-time presidential candidate Ksenia Sobchak), the manifesto, entitled“The Rape of Europa 2.0,” uses quite inflammatory, indeed offensive, language to lambast the modern West as a model that Russia should discard in favour of a “new right-wing ideology.”

Bogomolov nods briefly in the direction of his liberal friends in Russia’s “creative classes.” He expresses a love of the Europe that he and others longed to join in the 1990s. He expresses his hatred of “the spirit of violence and atmosphere of fear” in Russia. And he says that people like Gubin are partially right in denouncing the “prison guards and slaves” who make up the Russian people. But he then heads off in an entirely different direction. Using language that would see him expelled from polite society in much of the West, Bogomolov writes:

“The contemporary Western world has turned into a New ethical Reich with its ideology of ‘the new ethics.’ … We face ethical socialism, queer socialism. Siemens, Boss and Volkswagen have turned into Google, Apple and Facebook, and the Nazis have given way to an equally aggressive mix of queer activists, fem-fanatics, and eco-psychopaths, who have an equal desire to totally transform society.”

Bogomolov asserts that the Nazis controlled what people said but modern Western totalitarians also want to control how people feel.

Transgression leads to the loss of one’s job, or even worse, with social media companies acting as the new “Ministry of Truth” to enforce compliance. Sounding remarkably like the reactionaries of Russia’s conservative Izborsky Club, or far-right thinkers such as Alexander Dugin, Bogomolov continues (referring to the character Schwonder in Bulgakov’s novel Heart of a Dog):

“I loathe the spirit of violence and the atmosphere of fear [in Russia]. But that doesn’t mean that I accept the transformation of the country of prison guards and slaves into a country where … multicoloured (including white) Schwonders from BLM enter houses and demand that the professors kneel down, share their living space and give money to help the starving Floyds.”

The ultra-conservative Dugin once said, “I love the West. … Until a certain moment when this liberal, globalist ideology triumphed, the West was a jewel. … I consider that contemporary Europe is anti-Europe. I simply cannot accept the West in its current condition.”

The notionally liberal Bogomolov agrees. “In the 1990s Russia strove to be part of Europe … to return to European values, the values of the beautiful pre-war Europe,” he says. But that Europe has gone, he laments. Denouncing the historical determinism that says that Russia must follow Europe’s path, Bogomolov writes: “Russian intellectuals tell us: Russia is in the tail end of progress. No. Thanks to a confluence of circumstances we have ended up in the tail end of a mad train, steaming to a Hieronymus Bosch-style hell where we will be met by multicultural gender-neutral devils. We simply have to unhitch the wagon, cross ourselves and start building a new world. To rebuild our old dear Europe, the Europe we dreamed of, the Europe we have lost.”

While Novaya Gazeta did not endorse Bogomolov’s manifesto, the fact that the newspaper considered it acceptable to publish the article tells us something that people in the West perhaps don’t understand: On occasion, Russian liberalism can be very illiberal.

In the eyes of Russian liberals, neither Bogomolov or Sobchak are entirely “handshakeable”, as the expression goes. For all their notional dislike of the hated Russian state, they’re seen as far too ready to compromise with the authorities (Bogomolov, for instance, joined anti-government protests in the early 2010s, but later supported Moscow mayor Sergei Sobyanin during the 2018 mayoral elections).

Still, they’re part of the family of the liberal intelligentsia, a fact that makes Bogomolov’s piece all the more shocking. If it had come from Dugin, it could have been shrugged off as reactionary nonsense. But coming from a highly decorated theatre director, and being published in the flagship of the liberal press, Novaya Gazeta, it’s like a big sharp knife in the back of Russian liberalism.

Bogomolov’s timing is also significant. The protests that followed the arrest of Aleksei Navalny last month were supposed to provide an opportunity for Russians to come together to fight the state. But quite the opposite has happened. First, the founder of the liberal Yabloko party, Grigory Yavlinsky, denounced Navalny for his supposed authoritarian tendencies. And now Bogomolov has come out and challenged Russian liberals’ most basic belief – the superiority, and inevitability, of the Western model.

Another nineteenth century Russian philosopher Stepan Shevyryov remarked that, “in our frank, friendly, and close relations with the West we have failed to notice that it is like a man who carries within himself a dreadful contagious disease … We kiss him, embrace him … and allow the delights of the banquet to mask the odor of decay which he emanates.” For two hundred years, this has been the mantra of Russian conservatives. It would be far too early to say that Russian liberals have fallen out of love with the West, but when Novaya Gazeta now starts talking in the same way, something strange is definitely going on.