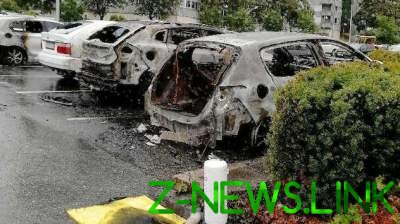 Simultaneous attacks were carried out in eight different areas.

Swept the country a wave of arsons of cars. Social networks abound filmed on video phone, where raging in the courts on several machines. But before that, between them scurried suspicious young people in hoods and masks.

On the eve of national elections that will be held in Sweden next month, the society is concerned about a resurgent gangs of arsonists cars. On Monday evening in the Swedish cities of Gothenburg, Trollhättan and Falkenberg set on fire or smashed by vandals about a hundred cars. Several of the cars burned in Stockholm. The Prime Minister of Sweden Stefan Lofven believes that the actions of the arsonists looked organized and was similar to some sort of military operation.

Police are puzzled, what could cause such a massive attack on the cars, although law enforcement officials confirmed that the arson committed by a gang of thugs, whose number currently specified. Young people were trained and acted almost simultaneously – it is believed that a coordinated attack was planned via social media. The fire broke out at around 21 hours local time, and around midnight was already extinguished.

Managed to arrest several suspicious young men who were near the places of occurrence, in Trollhattan. But police have no clear evidence that they are involved in the arsons.

The residents of the houses vyhladavanie in the window shortly before the fire was noticed dressed in black tracksuits men in masks and hoods and say that it all looked organized action. The police said that later on one of the Parking lot adjacent to streets found a box with “Molotov cocktails”.