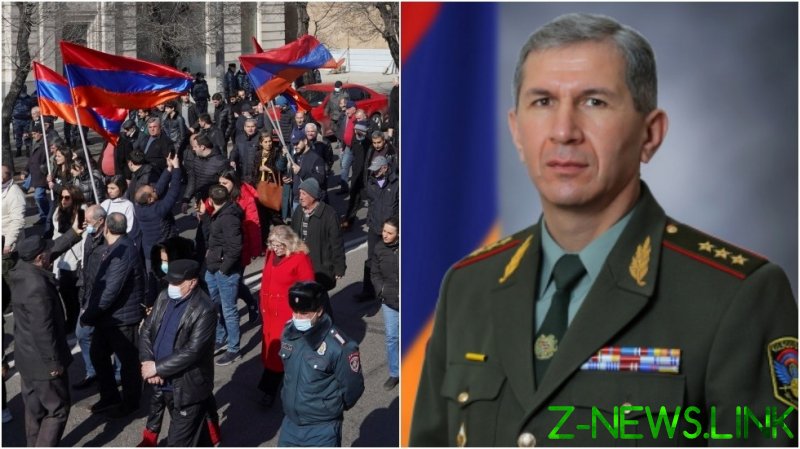 Pashinyan ordered the dismissal of the head of the General Staff, Onik Gasparyan, on Thursday, in response to what he called an attempted coup against him. The order followed a joint statement by Armenian military commanders and two former presidents, Robert Kocharyan and Serzh Sargsyan, who called on the prime minister to swiftly resign.

Pashinyan has been under increasing pressure since November, after he signed an unpopular ceasefire deal with Azerbaijan, which ended the fighting in disputed Nagorno-Karabakh but saw parts of the region passing to Azeri control.

Pashinyan has acknowledged that the Moscow-brokered deal, which saw Russian peacekeepers deployed to the disputed region, saved the ethnic Armenian troops from complete and utter defeat. However, Pashinyan’s government has also been accused of mishandling defense policy and thus causing the military disaster in the first place.

The tension between Pashinyan and the military reached boiling point this week after he claimed that Russian-made Iskander missiles – which Moscow says weren’t used in Nagorno Karabakh – had malfunctioned during the conflict. Gasparyan’s deputy publicly rebuked the prime minister’s claim and was then fired. The General Staff’s response, calling on Pashinyan to resign, then placed Gasparyan himself in the crosshairs.

Sarkissian on Saturday returned the draft law on sacking the head of the general staff to Pashinyan and outlined his objections to it. The motion by the embattled prime minister “contradicts the constitution at its core,” Sarkissian’s office pointed out. The statement added that the president doesn’t side with any political power and only makes decisions based on Armenia’s national interests.

If Pashinyan doesn’t agree with the president’s objections, the law allows him to forward the order to the president once again. In this case, Sarkissian would have to respond by either signing it or taking the issue to the Constitutional Court. If he does nothing, the order will go into force automatically.

The news that the embattled PM’s order hadn’t been approved was announced in front of several thousand anti-Pashinyan demonstrators who gathered in Yerevan on Saturday. The crowd greeted the president’s decision with a round of applause. The people then marched through the center of the city, with the police making no attempts to stop them.

Opposition activists have been taking to the streets since Thursday, erecting barricades and setting up an encampment in the capital. They insist that the PM must go and that this demand is non-negotiable. Supporters of Pashinyan have, in turn, staged counter-protests in Yerevan.