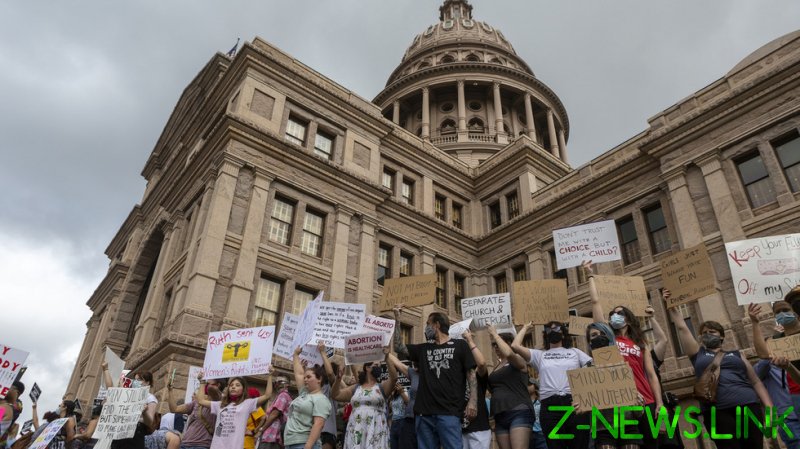 The 5th US Circuit Court of Appeals overruled the decision by a lower federal court on Friday, thus allowing Texas to resume the enforcement of its abortion law, which effectively prohibits the termination of pregnancy past six weeks of gestation.

Commonly known as the “heartbeat bill,” the statewide abortion law was put on hold on Wednesday after US District Judge Robert Pitman sided with President Joe Biden’s Justice Department, with the White House calling the ruling “an important step toward restoring the constitutional rights of women.”

The victory lap was short-lived, however. With the appeals court granting the Texas government’s request to stay the preliminary injunction on Friday, the DOJ now has until October 12 to respond.

In a bid to shield the law from federal challenges, the Texas government argued that it’s not officials, but private citizens who would enforce it by suing abortion providers. Under the law, citizens can be awarded more than $10,000 in damages plus legal costs if successful. Although Texas’ attempt to effectively muddy the waters did not stop the Biden administration from contesting the near-total ban, it has had its desired effect on abortion clinics, some of which have closed their doors since the law went into effect on September 1.

Several abortion providers reportedly resumed services on Thursday, hours before the appeals court reinstated the ban. Commenting on the new twist in what promises to be a protracted legal battle, President of the Center for Reproductive Rights Nancy Northup urged the Supreme Court to “step in and stop the madness.”

The Biden administration has long argued that the law defies the US constitution, insisting it should be declared “null and void.”