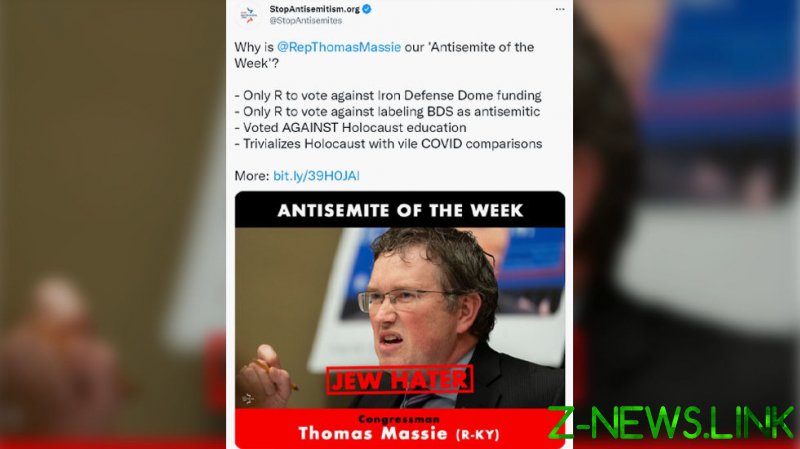 Stop Antisemitism, which was launched in 2018, has listed many Americans as its “Antisemite of the week,” including pop star Dua Lipa, Daily Show host Trevor Noah, MSNBC’s Mehdi Hasan, and even Human Rights Watch executive director Ken Roth – a Jewish American whose father was a refugee from Nazi Germany.

After Massie became the only Republican congressman to vote against further funding for Israel’s Iron Dome missile system last week – an act consistent with his politically libertarian and fiscally conservative track record in Congress – Stop Antisemitism set its sights on the representative, publishing a photo of his face with “JEW HATER” stamped on top.

“Rep. Thomas Massie’s voting record clearly shows his lack of support of the Jewish people and the Jewish Nation. In fact, his views are aligned with those of other notorious antisemites like Congresswomen Ilhan Omar and Rashida Tlaib,” the organization declared, also listing Massie’s opposition to the government “labeling BDS as antisemitic.”

Though Stop Antisemitism’s campaign against Massie received support from Arizona state representative and Democrat Zionist Alma Hernandez, many prominent conservatives and libertarians piled onto the organization in protest.

“This is defamatory nonsense. Massie has explained in detail how he votes, and he is against *government funding* of avenues where he believes the government has no role,” reacted journalist Jordan Schachtel, while Human Events co-publisher Will Chamberlain called the organization’s comments “appalling slander” and said it “should be ashamed of itself.”

Reason senior editor Robby Soave tweeted, “This is nonsense. It is not anti-Semitic to believe that other countries should pay for their own defenses,” while New York Young Republican Club’s chairman, Gavin Wax, accused Stop Antisemitism of “devaluing the meaning of antisemitism” with its “incredibly stupid” attack.

Despite experiencing heavy backlash for its campaign against Massie, the organization refused to apologize or withdraw the congressman as “Antisemite of the week.”

Massie is not the only elected US official to be chosen as “Antisemite of the week.” Representatives Marjorie Taylor Greene (R-Georgia), Alexandria Ocasio-Cortez (D-New York), Ilhan Omar (D-Minnesota), and Rashida Tlaib (D-Michigan) have previously been the subjects of attack by Stop Antisemitism.